Live To Give Ja Foundation reaching out to needy 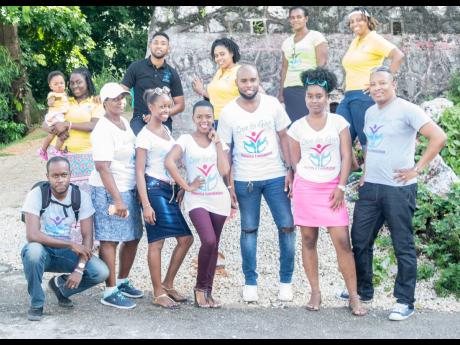 Shanna kaye Monteith
Founder of the Live to Give Jamaica Foundation, Carlton Stewart (back left), and his team.

Wisdom comes through experience, and Carlton Stewart understands fully the terrors of the have-nots, having had what he referred to as a personal encounter with poverty.

It is for this reason, especially, that he went on to establish the Live To Give Jamaica Foundation, a non-profit Christian charity organisations, whose objective is to offer help to the needy in the country. Its core functions include providing food, clothes, basic necessities and mentorship to those in need.

“I have a vision of taking action to alleviate poverty in any way possible. The inspiration came out of personal experiences with poverty and knowing how it felt not having all the needs. And now, being in a capacity to assist, it comes with joy.

“The idea was pitched to close friends who had similar experiences and having a like passion, and that’s how it was birthed,” Stewart said, adding that the official launch took place in November 2017, but that the foundation had been coordinating charitable initiatives since 2014.

He told Family & Religion that the initial efforts were centred on three main annual events: A Grocery Day in March, where food and personal care packages were given to families in need; a back-to-school treat in August, when school-supply packages were given to children deemed to be in need of assistance from a randomly selected community; and a Christmas treat in December at a children’s home – initiatives that have catered to over 700 children and approximately 300 families thus far.

“We have, however, expanded our outreach as we seek new avenues to assist the needy. Being a strong supporter of education, in 2018, the foundation launched what will be an annual scholarship awarded to students matriculating to high school from primary school.

“Ten students in need of assistance were awarded scholarships of $10,000 each after achieving an average above 80 per cent in the GSAT (Grade Six Achievement Test).

“The foundation has also given its support to the fight against cancer and assisted a cancer patient with a cash donation to offset the cost for cancer treatment overseas,” Stewart shared.

The Live to Give Jamaica Foundation, which is registered with the Companies Office of Jamaica, has been given charitable status by the Department of Co-operative and Friendly Societies and is self-funded by its board members, as well as by contributions from volunteers and donors.

“Most of what is done by the organisation is never published or advertised. Our efforts now to publish are in an effort to raise awareness and needed funding from stakeholders and citizens.

“The organisation now is self-funded by the seven board members and donations from individuals we know,” said Stewart.

With the foundation’s next Grocery Day undertaking set for April, Stewart told Family & Religion that they are trying to finalise the community they will be going into.

“We generally work with a social worker, who identifies same and accompanies us on our visit. The aim is to identify families within these communities and to provide bags of groceries, and in the hand-over process, we generally pray with the families and offer some amount of emotional support in that small time window.

“The bags of groceries usually include basic food items such as rice, flour, sugar, cornmeal, bread, ketchup, tin items, dry goods, like macaroni and oats, and toiletries,” he said, adding that following each visit, they assess to see whether there are any other needs and then do another visit to fill those particular needs.

Those wishing to contribute to the initiative or to find out more about the Live to Give Jamaica Foundation and its activities may find them on their Facebook page: www.facebook.com/livetogiveja, or contact them via email at livetogivejamaica@gmail.com, or (876) 854-9301.