Farm thieves prey on their own - Praedial larcenists largely known by victims; under-reporting rife as frustration sets in 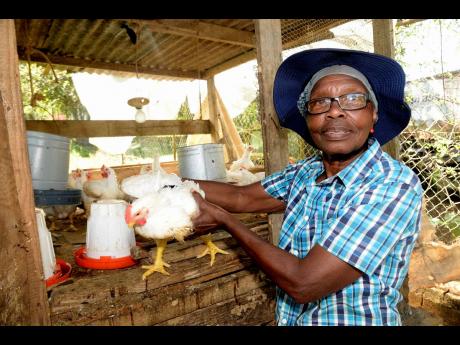 Lionel Rookwood
Monica Findlay tends to chickens on her farm in Santa Cruz, St Elizabeth. Thieves have decimated her livestock, forcing her to give up on rearing goats. 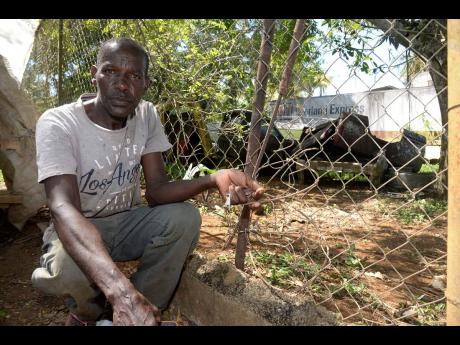 Lionel Rookwood
Kenrick Morgan shows the hole in the fence that was cut by thieves in a bid to steal his goats in Santa Cruz, St Elizabeth.
1
2

Citing a lack of prosecution of farm theft across the Breadbasket Parish, the commanding officer of the St Elizabeth police is fearful that the crime is heavily under-reported and that the seeds of vigilantism are finding fertile ground among militant cultivators.

There were 86 reports of praedial larceny across 11 police stations in St Bess in 2018, but Superintendent Catherine Lord believes that statistic is the tip of the iceberg, as anecdotal evidence suggests that most farmers know that the enemy is in their camp.

“Some are basically reported for reporting sake and not necessarily for the police to take any action, especially in many of the instances where the persons reporting would indicate that they believe that the produce has been stolen by relatives or persons in the very same community,” she said.

“We don’t have instances, for example, of produce being stolen like just after it has been sprayed, so it is people who know about what is happening generally in the community.”

The senior cop said under-reporting was especially rife in the parish’s southern belt. There were very few reports in Junction, Malvern and the Pedro Plains, she said, but there were 18 in Santa Cruz. The majority of praedial larceny reports were made in Black River, where 38 farmers came forward last year to report theft from their property.

“Over on the south is where we have the major farms, so we believe really that it [praedial theft] is under-reported,” she said.

Fearing a wave of bloodletting out of desperation, Lord has warned farmers that they may face criminal charges for taking the law into their own hands, and sought to reaffirm her commitment to helping victims of praedial larceny.

“Reducing the incidence of praedial larceny is, in fact, one of our divisional issues and concerns. It is one of the divisional priorities that we will be focusing on this year,” the parish commander told The Sunday Gleaner.

“We encourage persons where they have stolen livestock or ground produce, that [farmers] just need to make the report to us so that we can deal with it, because yes, we believe that it is having an impact on the economy of the parish, but we can only act where the farmers give us the information that is required,” she said.

Despite Lord’s optimism about the work of an “agro-enforcement team” in her division, Agriculture Minister Audley Shaw last week vowed that he would, in collaboration with the Ministry of National Security, overhaul the Praedial Larceny Prevention Unit because it had become toothless.

“I am going to review the present praedial larceny unit that exists at my ministry,” Shaw said on Ash Wednesday at The Hague Agricultural Show in Trelawny. “It needs beefing up, it needs more resources, and I am going to ensure that we put more resources.”

However, convinced that the police lack the capacity to protect their livelihood, some St Elizabeth farmers have declared that vigilante justice is their only recourse to praedial larceny, which costs the agriculture sector an estimated $6 billion annually. Several farmers relayed their frustration to The Sunday Gleaner during a tour of the parish recently.

“You can’t get up every day and say, ‘All right, this is your livelihood,’ and you go to your bed and tomorrow morning when you get up, it gone,” lamented 62-year-old farmer Kenrick Morgan.

“Then when you thief my living, what do you expect me to do? No go thief your own, don’t it? This thing needs to be addressed more properly,” he said.

Morgan went to his farm in Park district in Santa Cruz a few Fridays ago to find some of his prized goats missing.

“When I went around the back, is the gate I saw wide open, and when mi check, nine head of the goat missing,” he said.

Upon conducting further checks, he realised that the thieves had cut the fence securing his large property. When he went to the police station about three miles from where he lives, he was advised to look for them and to return if he had no luck in locating the animals.

Fortunately, for him, several of his neighbours joined him in the search for the goats and they were able to locate them some distance away. One was killed, while the others were tied up near bushes.

He said a number of persons have stopped farming as a result of praedial theft and because they believed the police were impotent to repel the predators.

His neighbour, Monica Findlay, remembers when she had as many as 30 goats on her farm, but thieves have targeted her so often that she has decided against raising any more.

“They use to just steal them, one or two ram goats (at one time), and eventually we shut it down,” she said.

Goats were not the only thing fleeced from her farm, as her pigs were also stolen when she and her family went to church one morning.

“The Sunday morning we went to church and came back and eight big pigs gone leave one little one. When we went to feed them, we saw what happen,” she said.

“Quite often, the farmers don’t even bother to report, because the police can’t handle it, so there might be a misconception that praedial larceny isn’t happening on a grand scale, but the farmers have been absorbing it and many of them just give up and don’t bother with the goat farming anymore,” she stated.

Head of the Praedial Larceny Prevention Unit, Inspector Maurice McLean, is urging farmers to be more proactive and protect their livelihood.

“They are trying to blame the authorities for not looking about their interest, and when you go on the ground with our farmers, we realise that they themselves are not taking full responsibilities,” he said.

The inspector pointed to the fact that animals are oftentimes let lose to roam about, even on public thoroughfares.

He also encouraged farmers to remove heavy vegetation from off their properties, which provides ready cover for thieves, and would also like to see more effort placed on limiting access to farms by installing proper fencing.

“I am saying to farmers right now, make an assessment, do your due diligence, vet the prospective employees. If you want to find out more about them, go to the nearest police station in the area and ask the police and given them the person’s name,” he said.

Some farmers in the neighbouring parish of Manchester, in rural communities such as Prospect, have not been making reports to the police. They have, instead, taken matters into their own hands and they feel this has resulted in a reduction in reports of praedial theft in their community. When The Sunday Gleaner visited Prospect, farmers related stories of praedial thieves being beaten by residents.

“Down here different from many places, you know, because if you steal the animal one time, you are not going to get to steal it two times,” said 70-year-old Phillip Richards, who was watching a cricket match on television while his goats roamed in the distance.

“One of the time they were stealing goats and thing, but we never give up. One of the time, my brethren lose seven head (of goat) and is not him one,” he said, before explaining that the incidence of theft has receded since farmers decided to fight back.