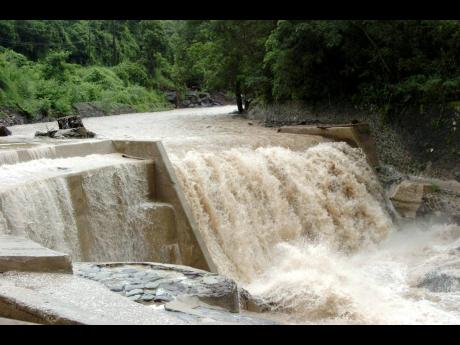 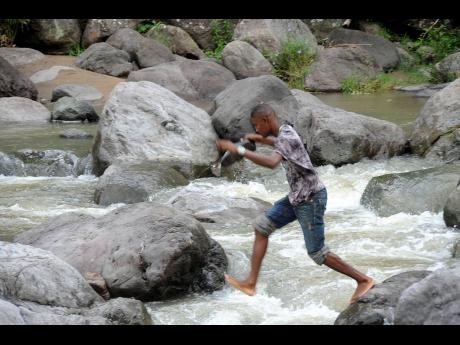 Ian Allen
This young man make his way across the Wag Water River in St Mary. 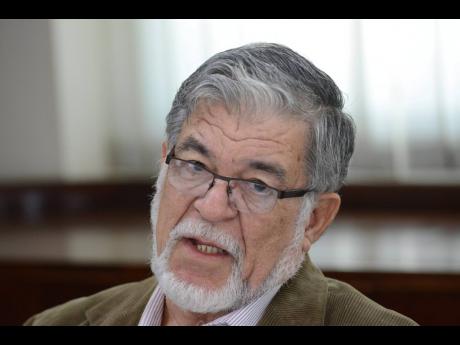 Jamaica has now entered the dry season and the driest month of the year. This dry period will impact the availability of water resources to meet the irrigation and domestic/public supply of water for the rest of 2019.

Rainfall in the latter half of 2018 has been below normal (30-year mean rainfall 1971-2000), and in light of weather projections Jamaica could have problems meeting its water demand.

A review of the monthly rainfall summaries for 2018 distributed by the Meteorological Service of Jamaica (Met service) indicates the following rainfall for the months listed in the table below.

April to December 2018 Rainfall for Jamaica

The table shows that while the island had above-normal rainfall in May 2018, all subsequent months had below-normal rainfall, including the primary rainfall month of October. This may be because of climate change and/or the fact that Jamaica had no tropical storm or hurricane that affected the island directly or indirectly with regard to rainfall. It must be noted that the 2017 rainfall for the nine months listed above exceeded the 2018 rainfall for the same months, indicating fewer water resources in 2018 for the island. So, 2018 was a drier year than 2017. What does 2019 hold for the island?

Rainfall is the only source of water into Jamaica. Rainfall gives rise to three components – rainwater (evapotranspiration), surface water runoff (rivers and streams), and groundwater discharge (aquifers). The total rainfall across the island is equal to the sum of the above three components, and the Water Resources Authority (WRA) has estimated that of the total islandwide rainfall, 57 per cent goes to evapotranspiration, 26 per cent to surface water runoff, and 17 per cent to groundwater.

Therefore, if there is reduced or no rainfall, the available water resources for meeting the water demand will be directly impacted, as was seen in the very dry year of 2014 when water was rationed across the KMA, as storage in the Mona Reservoir and the Hermitage Dam each declined to less than 30 per cent, and many rural areas were without water, as the rivers and springs, the sources of supply, all ceased flowing.

The WRA monitors stream flow at several rivers via gauging stations. This data can be accessed via the online hydrologic database on the WRA’s website. A review of the data for 2016 to 2018 shows that flows in rivers draining aquiclude (impermeable) catchments (that are dependent on rainfall) have been declining, with the reduced rainfall, though much less than expected, while those rivers that drain aquifer (permeable limestone) systems have maintained their flow from groundwater storage.

The rivers that provide water to the two major surface-water storage systems, viz. Hermitage Dam, are the Wag Water, Ginger, Moresham and Boar rivers, and for the Mona Reservoir, the Yallahs and Hope rivers. These rivers all drain aquiclude catchments such that once there is no rainfall, flows decline.

Spot measurements are taken once per month at the Wag Water River above Hermitage, and the Ginger and Moresham rivers at Hermitage. The measurements indicate lowered flows up to September, but a small increase in October resulting from the rainfall over the catchment areas. Rainfall over the KSA was in September 65 per cent, October 50 per cent, November 34 per cent, and December 42 per cent of the normal rainfall, but sufficient to maintain flow in the rivers, though at a lower-than-normal rate. This rainfall in the dry season may be the manifestation of the climate-change prediction – wetter dry seasons and drier wet seasons.

The station on the Hope River at Gordon Town recorded a decline in flow in October 2018, but for the November-December 2018 period, flow remained above 0.2m3/s, not the lowest recorded.

The table below summarises the stream flow data for the Wag Water and Hope rivers, for which data exist for the years 2016, 2017 and 2018.

The high-pressure system across the island, at time of writing, with no rainfall, strong winds and high temperatures, will increase evaporation from the surface of the storage systems and increase water demand. In addition, the many pipeline breaks along the Constant Spring Road and other roads where construction is taking place have led to loss of water from storage and income to the National Water Commission (NWC). The distribution of water from the Mona and Hermitage storage systems to areas depleted of supply resulting from the breaking of the pipelines along Mandela Highway and other roads has also impacted the storage volumes, especially on the Mona Reservoir, while creating serious problems for householders, businesses and schools.

The Caribbean Climate Outlook Forum (CariCOF) has, in a document titled ‘CariCOFDrought Outlook’ released in December 2018, projected the short-term (up to March 31, 2019) and long-term (up to July 31, 2019) drought outlook for the Caribbean region. For Jamaica, it was projected as follows:

The year 2019 has started with a water deficit. Below-normal rainfall for 2018 has led to storage volumes in the Mona Reservoir and Hermitage Dam at the start of the dry season and driest month (February) being well below the maximum level. This has implications for water supply, especially if the secondary rainy season of May 2019 is below normal and the island is forced to go beyond July with less-than-desired storage.

The weather projections for the period up to July 2019 are for warmer-than-normal temperatures, and lower-than-normal rainfall increasing water demands, and the possibility for severe drought, especially in eastern Jamaica where the capital city and the main surface-water storage systems are located.

While the El Nino, which impacts the Caribbean by significantly reducing rainfall, is now weak (neutral as stated by NASA and NOAA), any strengthening of this phenomenon could increase the probability of a very dry year and an increased risk of a more severe drought.

Monitoring of rainfall, water resources and water supply by the Met Service, WRA and the NWC, respectively, should be increased to provide the data to analyse the changes, modify the projections, and enable preparations to be made for a severe event, if necessary. Conservation should now be practised by all to ensure a water secure 2019 year.

Information on the water situation must be made available to the public on a regular basis to ensure full understanding and cooperation.

Note: All rainfall data from the Met Service’s Monthly Rainfall Summary, all surface water data from the WRA, storage volumes from the NWC’s website and climate predictions from the Caribbean Drought Monitoring Network (CDMN) and CariCOF releases.

Basil Fernandez is a hydrogeologist. Email feedback to columns@gleanerjm.com and bpfernandez1@gmail.com.