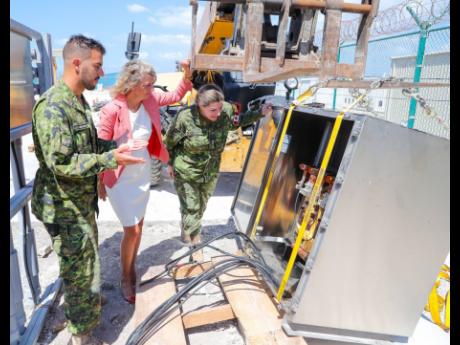 A Canadian operational support hub (OSH) being mobilised in Jamaica to support Latin America and the Caribbean (LAC), will facilitate the provision of logistical support, peacekeeping, development, humanitarian and disaster relief, as well as any other operation that might arise in the region.

The hub was established in March 2016 in a memorandum of understanding between the governments of Jamaica and Canada to directly support regional disaster mitigation and climate-resilience efforts.

Operational support hubs are a concept developed to increase Canadian Armed Forces (CAF) agility throughout the world, reducing reaction time, increasing effectiveness, and improving the flexibility of commanders to respond to fluid situations.

This is achieved through the pre-positioning of key equipment, including accommodations, communications, and utilities (water, sewer and electrical distribution).

High Commissioner of Canada to Jamaica Laurie J. Peters inspected the facility and the upgrading works, which are currently under way since January, with a focus on excavation, electrical, communications, and infrastructure upgrade.

“The existence of this hub is one which is extremely valuable to vulnerable island states, especially during the hurricane season, and is an excellent reinforcement of disaster- and emergency-support systems, which already exist regionally,” Peters said.

One of the primary goals of OSH LAC is a ‘camp in a box’, which consists of accommodations for approximately 200 people, an eating and common area, and an operation zone – all located on land measuring 150 metres by 300 metres.

When the hub is not in operation, more than 20 containers and over a dozen concrete pads are all that can be seen. However, upon activation, modular tentage appears on every pad, providing accommodations or working areas, and power, communications, and lighting are rapidly set up in a matter of weeks.

The upgrade, which should be completed by the end of this month, will decrease the activation time and increase overall responsiveness to operations in the region.

Since its 2016 establishment, the operational support hub has improved the ability of the Canadian Air Forces to assist the region during emergencies and disaster response efforts.

The operational hub’s effectiveness was realised during the very active 2017 hurricane season, where Canadian troops were deployed and airlifts sent to Dominica after the impacts of hurricanes Irma and Maria.

The hub, when operationalised, is also able to support evacuations, deployment of military forces to impacted emergency sites within the region, coordinate civilian airlifts, support emergency communications, and a variety of emergency operations that may be required.

This year’s operations will include an increase in interoperability between the CAF and the Jamaica Defence Force (JDF), providing joint training with the JDF, which will also use the hub for practising reception, staging, onward movement in preparation for expeditionary operations.