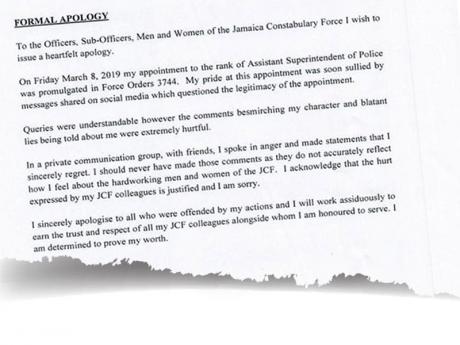 Assistant Superintendent Joel Hamilton has moved to quell the firestorm ignited by his appointment earlier this month and critical comments he made about some members of the Jamaica Constabulary Force (JCF).

Hamilton, a former staff sergeant in the Jamaica Defence Force (JDF), was brought over as a district constable to head the security team of Police Commissioner Major General Antony Anderson, himself a former army chief.

A year later, Hamilton was appointed assistant superintendent of police earning the wrath of rank-and-file members of the JCF who described the appointment as a slap in the face to other qualified, long-serving police personnel.

Amid the criticisms, a police source says pictures of Hamilton and members of his family were removed from his Facebook account and posted all over the Internet with derogatory comments.

Reacting to this, sources said, Hamilton posted a voice message in a chat group with military personnel.

In the message, obtained by The Gleaner, Hamilton explained the process for his appointment as Assistant Superintendent and expressed distrust for the police.

Hamilton said the cops criticising him were misinformed.

"Dem nuh have a clue. Me a staff sergeant, I've not been private for many years," he said in the voice message.

But in an email sent to all members of the JCF, Hamilton said he sincerely regretted those comments, admitting that they were made in anger in a private communication group with friends.

He acknowledged, too, that the pride he felt about being appointed to the officer corps of the JCF was "sullied" by messages shared on social media which questioned the legitimacy of the appointment.

"Queries were understandable, however, comments besmirching my character and blatant lies being told about me were extremely hurtful," Hamilton said.

Despite this, he conceded that he should not have made the comments as they do not accurately reflect how he feels about the hardworking men and women in the JCF.

"I acknowledge that the hurt expressed by my JCF colleagues is justified and I am sorry," said Hamilton, while indicating that he will work hard to earn the trust of his JCF colleagues.