The artist Mazola says his prayer 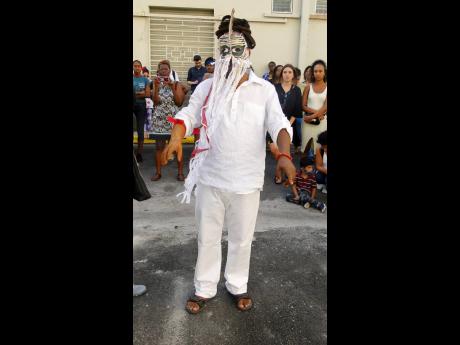 Paul Williams
Mazola getting ready to strut down the ‘aisle’.

Kenyan-Jamaican fusion artist Mazola Wa Mwashighadi is known for his assemblages, made of eclectic materials, some of which he has picked up from off the road. He takes what some people would regard as junk and scrap and turns them into engaging works of art oozing the wow factor.

But Mazola is also known for his installations, not art that can be hung from a wall or placed atop a desk, usually disintegrating after a day or more. They are statement set-ups that are often thought-provoking and intended to convey a message in a way that is beyond the mundane.

Recently, he held another provocative event. It was called Salah, a Kiswahili/Arabic word that means ‘prayer’, an activity that means much to many people all over the world, Mazola said.

“The installation and performance is my sincere enquiry into the depth of prayer in all the different major faiths, which, in their endeavour, have worked tediously in covering the door of our eyes with their dogmas and foreign ideologies (curtains), obstructing our clear view of our mystical existence and coexistence with nature and within ourselves,” he told Living.

In an open asphalted lot between high walls of two old buildings on Church Lane in downtown Kingston, Mazola set up Salah and performed the prayer as curious onlookers and invited patrons watched.

Dressed in white cotton clothes and wearing a ‘pitchy-patchy’ white mask, he walked up an ‘aisle’ made of strips of carpet. On either side of the aisle were chairs of different styles and sizes wrapped with transparent green plastic. They represented people in a ‘church’.

When he arrived at a Revivalesque altar, it consisted mainly of empty rum bottles. Among the paraphernalia was a wooden staff/rod once used by his great-grandfather, a village guardian in Kenya.

“My DNA stems from a bloodline of community guardians and rainmakers,” he told Living.

At the altar, he poured water into a bowl, removed his mask, and washed his face before walking back down the aisle. Halfway down, he knelt and prayed for a few minutes. Then, he turned the chairs over one by one. After, he knelt down and prayed again.

After the second prayer, Mazola walked along a high eastern wall on which was affixed two pieces of used furniture. At the centre of that assemblage, there was an African mask. Pieces of cloth hung from the wooden set-up. To remove the cloth, he climbed a ladder that rested against the wall.

What was revealed was a big, round mirror partially covered by the wood assemblage, from which many strings of coloured beads dangled above a short piece of African-patterned fabric, which was part of the aisle.

After the revelation, Mazola went back to the altar and held on to his staff for a while before washing his hands in the bowl, again. Back down the aisle, he raised his arms into the air. The performance was over.

In explaining his actions to the audience, he said that he used symbols from different religions, including Revivalism, Buddhism, and Islam. He said that he was not against any faith, and neither did he belong to any.

“And so, I fused all the major modern/ancient, but foreign faiths, weaving them into a peaceful coexistence within Revivalism, which is very close to my tribal way, I think,” he explained.

The cloths draped from the assemblage, he said, represented religions as religions are ‘curtains’, “hindrances from seeing who we are” in the mirror. “As an artist, I find my own way [to pray],” Mazola said. “As I pray, I remove all these curtains and walk into mysticism.”