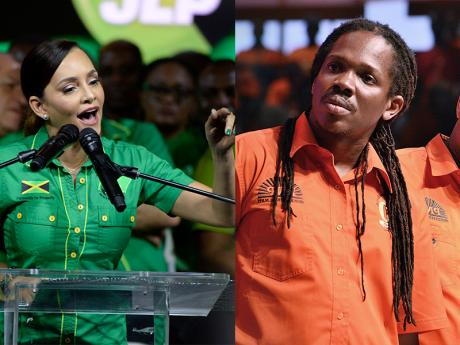 The People’s National Party’s Damion Crawford and the Jamaica Labour Party’s Ann Marie Vaz have now been nominated to run for the Portland Eastern seat in the April 4 by-election.

The by-election was called after Dr Lynvale Bloomfield was murdered on February 2.

Here’s how things have been unfolding since this morning:

Ann Marie Vaz describes today as 'historic' saying she is the first female to be nominated in a by election for Eastern Portland. She was cheered on by supporters. One Labourite was confident Vaz will win the April 4 election. "Yuh nuh see how wi crowd big. We nuh import nuff people from town like PNP. PNP rent out all a the house dem up here and what unnu come see here a Portland people," the supporter said.

Ann Marie Vaz, the Jamaica Labour Party aspirant for Portland Eastern officially nominated in the race against the People's National Party's Damion Crawford. She was supported by Prime Minister and JLP Leader Andrew Holness and other members of the JLP hierarchy.

Police desperately try to maintain law and order as supporters of the Jamaica Labour Party converge at Carder Park while People's National Party comrades gather at Folly Oval. The police had to pull a woman clad in orange from a group of Labourites, after the woman, who is believed attempted to attack a member of a group decorated in green.

Damion Crawford nominated. Several PNP bigwigs were on hand helping to marshal proceedings for the party's nominee. In Port Antonio Square, there was a throng PNP supporters awaiting the arrival of Crawford.

Massive traffic congestion on the streets of Port Antonio as political supporters converge on the constituency.

PNP’s Damion Crawford hits the streets meeting comrades en route to the Nomination Centre.  They were chants of “Crawford, Crawford” as the politician waded through a throng of orange-clad supporters.