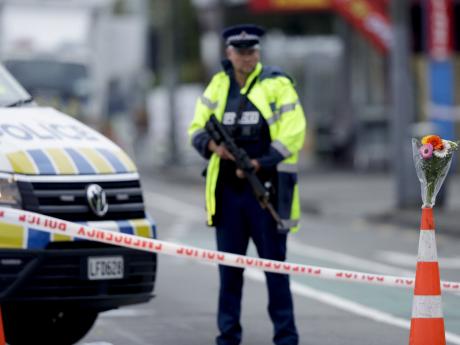 Flower rest at a roadblock, as a police officer stands guard near the Linwood mosque, site of one of the mass shootings at two mosques in Christchurch, New Zealand. (AP Photo/Mark Baker)

The Government and the Opposition have reacted with sadness to today's tragic mass shootings in New Zealand that have left at least 49 people dead.

Two mosques full of worshippers attending Friday prayers were set upon in an attack broadcast in horrifying live video by an immigrant-hating white nationalist wielding at least two assault rifles and a shotgun.

"We extend our deepest condolences to the families of the victims of these attacks in Christchurch, New Zealand," Minister of Foreign Affairs Senator Kamina Johnson Smith tweeted.

"We in Jamaica stand with your government and people in support of peace and tolerance, and against terror," she added.

Lisa Hanna, the opposition spokesperson on foreign affairs, said the attack is a reminder that persons must never relent in their vigilance against extremism and wanton acts of terrorism.

"The Opposition stands with the people of New Zealand in this moment of national tragedy, which has ruptured their usual peaceful way of living," she said in a statement.

Hanna said her sadness is compounded by the fact that the lives of several children were lost in the shooting, while others are receiving emergency treatment.