Jamaica on a path of economic growth – Shaw 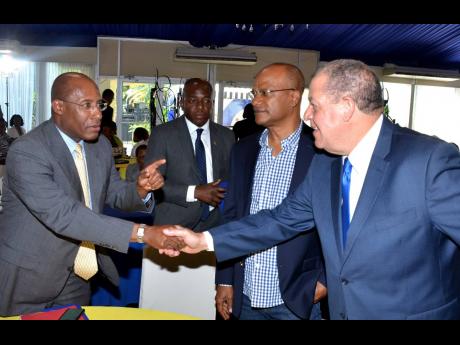 Industry, Commerce, Agriculture and Fisheries Minister Audley Shaw says that Jamaica has been on a path of economic growth for the last few years. He noted that the local investment climate has vastly improved, and the country’s lead investment promotion agency, JAMPRO, can attest to the fact that investors are calling.

“We have attained macroeconomic stability with incrementally improving levels of gross domestic product growth even while several fledgling industries find their footing and inspire further growth in the economy,” he said.

Shaw was giving the keynote address yesterday at the Planning Institute of Jamaica’s (PIOJ) inaugural Economic Growth Forum and the launch of the Growth Inducement Programme Research Report 2019 at the Terra Nova All-Suite Hotel.

He further stated that the Government would continue to create an enabling environment for individuals and businesses to thrive and create wealth for themselves and their communities, and, in turn, bolster national economic growth and development.

“I must pause to commend the PIOJ for its role in helping to steer and support the development of our country. Our Growth Inducement Strategy, established by the PIOJ, has helped to contextualise the scope of work and the areas in which this work is needed in order to bolster our position as a country to grasp and maintain a handle on sustainable development,” he said.

Shaw said that the components of the strategy were also reflected in the Memorandum of Economic and Financial Policies (MEFP), which underpins the International Monetary Fund-supported Extended Fund Facility (EFF) Arrangement on the path for economic reform for Jamaica.

He noted that the ministry, in recognition of its role as a driver of growth, would be focusing on several strategic priorities for the 2019-2020 budget year. These areas, he said, were targeted within the context of the national agriculture development strategy and would serve as a catalyst to enhance production and productivity, improve infrastructure, as well as support the expansion of businesses, particularly the Micro Small and Medium Enterprise sector.

“It cannot be lost on us that the agricultural sector grew by just over two per cent in the last quarter of 2018 despite a 6.9 per cent increase in domestic crop production in that quarter. It also cannot be lost on us that agriculture is a primary pillar of economic growth. Our plans to develop a modern, state-of-the-art agro-processing centre aimed at increasing local production towards ensuring food security and boosting exports is, therefore, foremost on my ministry’s agenda,” he reasoned.