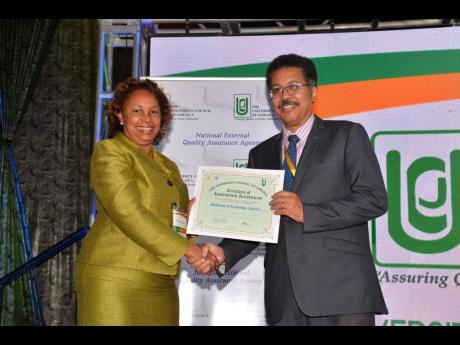 Albert Ferguson
Professor Stephen Vasciannie, president of the University of Technology Jamaica, collecting his Institutional accreditation certificate from Dr. Carolyn Hayle, chairman of the University Council of Jamaica (UCJ).  The certificate was handed over at the just-concluded UCJ symposium on quality assurance in higher education in Montego Bay.

The University of Technology and the Northern Caribbean University (NCU) were both presented with accreditation credentials for the administrative year spanning April 1, 2018, to March 31, 2019, at the just-concluded University Council of Jamaica (UCJ) symposium on quality assurance in higher education, in Montego Bay.

These two universities have now joined The University of the West Indies as institutions with the enviable distinction of having accreditation status in Jamaica.

Dr Dottlyn Minot, director of accreditation at the UCJ, said that the three tertiary institutions have all completed their first hurdle towards attaining institutional accreditation.

It was also noted that several other tertiary institutions such as Bethlehem Moravian College, the Edna Manley College of the Visual and Performing Arts, and Excelsior Community College were the recipients of UCJ’s accreditation for specific courses they offer.