‘One of New Zealand’s darkest days’ 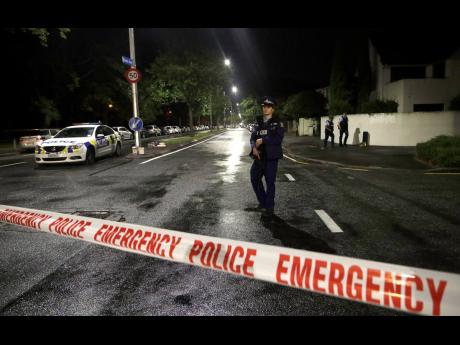 The self-proclaimed racist who attacked a New Zealand mosque during Friday prayers in an assault that killed 49 people used rifles covered in white-supremacist graffiti and listened to a song glorifying a Bosnian Serb war criminal.

These details highlight the toxic beliefs behind an unprecedented, live-streamed massacre, which Prime Minister Jacinda Ardern called “one of New Zealand’s darkest days.”

Some of the material posted by the killer resembles the meme-heavy hate speech prominent in dark corners of the internet. Beneath the online tropes lies a man who matter-of-factly wrote that he was preparing to conduct a horrific attack.

The shooter’s soundtrack as he drove to the mosque included an upbeat-sounding tune that belies its roots in a destructive European nationalist and religious conflict. The nationalist Serb song from the 1992-95 war that tore apart Yugoslavia glorifies Serbian fighters and Bosnian Serb political leader Radovan Karadzic, who is jailed at the United Nations war crimes tribunal in The Hague for genocide and other war crimes against Bosnian Muslims. A YouTube video for the song shows emaciated Muslim prisoners in Serb-run camps during the war. ‘Beware Ustashas and Turks,’ says the song, using wartime, derogatory terms for Bosnian Croats and Muslims.

When the gunman returned to his car after the shooting, the song ‘Fire’ by English rock band ‘The Crazy World of Arthur Brown’ can be heard blasting from the speakers. The singer bellows, “I am the god of hellfire!” as the man, a 28-year-old Australian, drives away.

At least two rifles used in the shooting bore references to Ebba Akerlund, an 11-year-old girl killed in an April 2017 truck-ramming attack in Stockholm by Rakhmat Akilov, a 39-year-old Uzbek man. Akerlund’s death is memorialised in the gunman’s apparent manifesto, published online, as an event that led to his decision to wage war against what he perceives as the enemies of Western civilisation.

The number 14 is also seen on the gunman’s rifles. It may refer to “14 Words,” which according to the Southern Poverty Law Center is a white supremacist slogan linked to Adolf Hitler’s “Mein Kampf.” He also used the symbol of the Schwarze Sonne, or black sun, which “has become synonymous with myriad far-right groups,” according to the center, which monitors hate groups.

In photographs from a now deleted Twitter account associated with the suspect that match the weaponry seen in his live-streamed video, there is a reference to “Vienna 1683,” the year the Ottoman Empire suffered a defeat in its siege of the city at the Battle of Kahlenberg. “Acre 1189,” a reference to the Crusades, is also written on the guns.

Four names of legendary Serbs who fought against the 500-year-rule of the Ottomans in the Balkans, written in the Cyrillic alphabet, are also seen on the gunman’s rifles.

The name Charles Martel, who the Southern Poverty Law Center says white supremacists credit “with saving Europe by defeating an invading Muslim force at the Battle of Tours in 734,” was also on the weapons. They also bore the inscription “Malta 1565,” a reference to the Great Siege of Malta, when the Maltese and the Knights of Malta defeated the Turks.