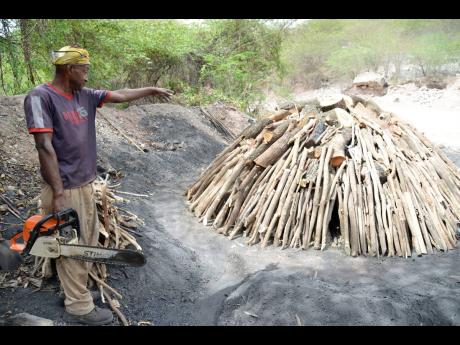 For decades, persons in the charcoal industry have been illegally cutting down trees in Jamaica’s forests to supply growing market demands. This, however, is not sitting well with environment authorities, who have warned that such persons are targets for prosecution.

Checks by The Gleaner revealed that the commodity costs between $1,000 and $1,500 per crocus bag, and with some restaurants demanding up to three bags per week, Jamaicans, especially those from rural areas, have been mowing down restricted acres to meet the demand.

According to coal producers interviewed by The Sunday Gleaner, it takes at least three days to harvest a substantial amount of wood to set up a worthwhile coal kiln. After that, it takes at least another week, technical knowledge, and patience to burn the wood to produce the commodity.

Marilyn Headley, chief executive officer and conserver of forests at the Forestry Department, said, however, that many individuals are avoiding the legal requirements necessary for the business.

“Cutting down trees for coal or otherwise is determined on who owns the trees or the land. If I’m planting trees on my land for charcoal production and then I’m cutting them down, then that is fine,” Headley said.

“But to cut trees on government land, you need a licence and a permit … . You have to pay for the licence for the volume and get the permit to cut it. If you don’t do that now, then you are committing an offence against the Forest Act,” said the CEO, noting also that Jamaicans also need a permit to use a chainsaw for commercial purposes.

“So if you want ‘X’ amount of metres of a particular species, then you would pay for that. The rate is there,” she continued, noting that persons wishing to cut down trees on state land must make an application at the department, which will then activate a series of inspections to determine whether the area and the producer’s credentials meet requisite standards.

According to the Forestry Department: “The current assessment reveals that over the last 16 years (1998-2013), there has been a 0.4 per cent gain in forest areas … . This gain in forest is attributable mainly to the gain in secondary forestry (ruinate forest) and, to a lesser extent, forest plantations.”

“All other broad classification of forests experienced varying percentages of losses over the assessment time period in 2013. Whereas we have gained in the quantity of forest, there is a marked reduction in the quality. Instead of experiencing deforestation, we are now experiencing forest degradation,” the agency continued, noting that it could not say what impact charcoal production had on the affected area.

Donald Williams, a farmer in Bull Bay, St Andrew, demonstrated with pride the techniques he uses to produce charcoal, which has been one of his sources of income for more than 20 years.

Williams said that he mainly gets his supply by cutting down trees in the lush hillsides of the rural Ten Miles community.

“Sometimes you have truckers, like when they are clearing up areas from far away, they will come and give me some wood, but I mainly use the ‘casha tree’ because the majority of the trees up here is casha,” said Williams, who outlined the skills and processes required to prevent the stack of wood from completely burning out, destroying the charcoal.

The process involves arranging larger pieces of wood for optimum impact, and covering the wood pile with zinc, while clogging sections to prevent flames from seeking out.

“This will burn for about a week, and when it finish, I can get about 80 feeding (crocus) bags out of it,” said Williams, stopping to say hello to a service vehicle loaded with policemen who passed him without question.

Suzanne Stanley, chief executive officer of the Jamaica Environment Trust (JET), said the entity was concerned about the environmental implications of the practice.

“Cutting down trees for charcoal is highly destructive as charcoal burners often cut down wide areas of trees to get the wood that best makes the coal. It is particularly a problem in protected areas where high levels of biodiversity are increasingly threatened by wide-scale deforestation,” said Stanley, in an emailed response to queries.

She said that JET has received an increasing number of complaints from Jamaicans about air pollution because of charcoal production.

“Large users of charcoal, restaurants drive the demand, and that is where the major problem lies. Local demand for charcoal would need to reduce significantly to effectively address this harmful practice,” she said.

Williams said that a well-constructed charcoal kiln does not emit open flames, but head of communications at the Jamaica Fire Brigade, Emeleo Ebanks, said the entity frowns on persons starting any kind of open fire.

“Distance and access to these areas are also concerns. In those hilly areas, we may have difficulty getting a fire truck there in the event that a fire starts,” he said, citing destructive wildfires.