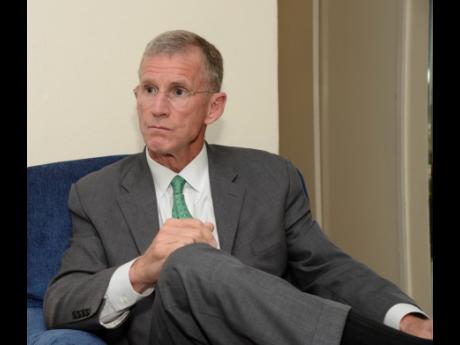 Ian Allen
Retired US Amy General Stanley McChrystal prepares to answer a question during an interview with The Gleaner at The Jamaica Pegasus last Thursday.

McChrystal, a former United States head of the Joint Special Operations Command as well as the International Security Assistance Force, told The Gleaner that President Donald Trump’s inward-looking philosophy on trade would do more harm than good if global partners are treated as enemies.

“I think there is a danger if the US starts to believe that international life is a zero sum game and that it’s all about what we can get for the United States. I personally think that we will cede some of our moral leadership, some of our economic leadership of the world, and I think that would be unfortunate,” said the 62-year-old, who commanded US forces in Afghanistan and Iraq.

“Rhetoric that talks about America first – whether or not any nation wants to support its own interests – it sends maybe an unintended message that maybe it’s America first and America only, and I don’t see the world that way,” added McChrystal, who calls himself “an unabashed globalist”.

The US president, since his inauguration in January 2017, has implemented trade tariffs against major trading partners – from allies like Canada to rivals China – in a campaign of protectionism to save American jobs, a strategy that economists have generally criticised as doomed to hurt consumers.

McChrystal, who visited Jamaica last week, was speaking with The Gleaner in a sit-down interview hours after delivering a lecture on leadership to government officials and private-sector industry heads at The Jamaica Pegasus in New Kingston.

Since retiring in 2010, McChrystal has been a Jackson Institute for Global Affairs senior fellow at Yale University, where he teaches a course on leadership. He is also promoting his book Team of Teams.

The retired general harbours fears that Trump’s affinity for engaging in television diplomacy, ratcheting up friction, and making headlines has done grave damage to America’s relations with friendly states and telegraphs a message of uncertainty, signalling that Washington cannot be trusted.

“I think President Trump has brought out some instincts in people and caused reactions in people that are unhelpful,” he said.

McChrystal, who graduated from West Point in 1976, is well aware of the dangers of war, having served in some of the bloodiest battlegrounds for American soldiers in the modern age.

He told The Gleaner that he is worried that some of the diplomatic fractures opened by Washington, especially attributed to Trump’s penchant to create policy on the fly, will not be easily healed, even if he is not re-elected to the White House in 2020. Actions such as pulling out of the Paris climate agreement have been roundly criticised by global leaders.

“I think the rhetoric and friction that have been created will not go away overnight. You create frustration, and it takes a while for it to be worked through. Hopefully ... as we move forward, we’ll take a better tack, we’ll see progress, but I think there’ll be ground to make up.”