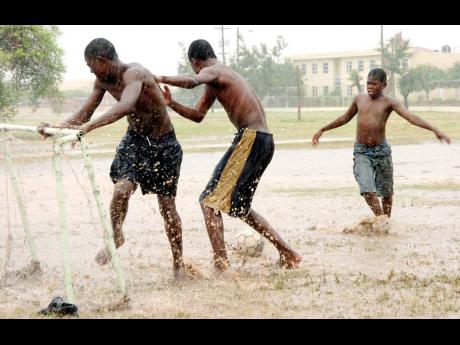 Rudolph Brown
File A group of youngsters playing football in heavy rainfall at National Heroes Park in Kingston. The landmark property is due to be redeveloped.

While Jamaicans are still basically divided on whether the Parliament should be relocated to the National Heroes Park, there is strong support for the area around the 50-acre property being developed in a manner similar to Emancipation Park.

According to an RJRGLEANER-commissioned Don Anderson poll, which was conducted between February 15 and March 3, there is 69 per cent support for the area around the park being developed similar to Emancipation Park, but 16 per cent oppose any such intent.

Civil engineer David Abrikian is not opposed to having a space similar to Emancipation Park on the 50-acre property, but he said that it should not be as high maintenance.

Abrikian said that the green space should include gazebos and play areas.

Emancipation Park was opened in 2002 and has become a refuge for those wanting to get away from the hustle and bustle of the city. Adorned with tropical flowers, trees, benches, a jogging trail, and well-manicured lawns, the facility has become the venue of choice for health and wellness fairs, weddings, and cultural events.

Given the limited green spaces in urban areas, one civil engineer believes that the seven-acre Emancipation Park model should be adopted for the redevelopment of National Heroes Park.

“I fully agree that the Heroes Park should be a special area where people and family can relax and so on,” he said.

“I don’t mind the grounds being a little jogging track and you can go there like Hope Gardens and Emancipation Park, but what I disagree with is that you should have a football field or you should have a stadium there, and it becomes the place where the community goes to play games,” he said.

The civil engineer, who wanted to remain anonymous because the redevelopment has become highly politicised, is not opposed to the relocation of the nation’s Parliament from Duke Street to National Heroes Park.

“After the Parliament building goes there, no more buildings should be inside the space. That space must be green, nice, with a little pond, a jogging track around the thing, and let people come and visit the national heroes’ shrines and learn about our country,” he said.

Abrikian has, however, sided with the 39 per cent who are against the Government’s decision to relocate the Parliament building to the sprawling central Kingston park. At least 40 per cent had no issue with this move, while 16 per cent said that they weren’t sure.

“It is an absolute waste of good park space to even think about putting the Parliament building there,” said Abrikian.

The redevelopment plan has stirred controversy because it might involve the relocation of hundreds of people who reside in communities that ring the park. Following public outcry, Prime Minister Andrew Holness hosted a town hall meeting last October to quell concerns.

Of those polled, 61 per cent are in agreement with the areas around the park being redeveloped into a government circle, with new buildings, while 23 per cent are opposed.

A total of 1,003 persons were polled with a plus or minus five margin of error.

The winning design for the new Parliament building is due to be chosen from a shortlist of five architectural entries.