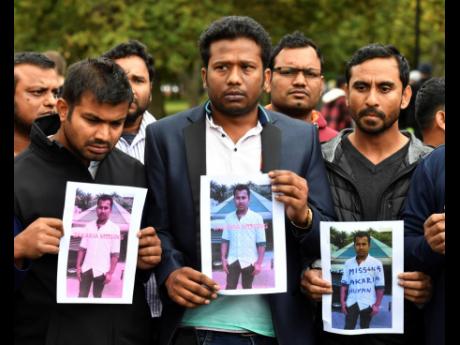 AP
Friends of a missing man, Zakaria Bhuiyan, hold up photos of him outside a refuge centre in Christchurch yesterday. The live-streamed attack by an immigrant-hating white nationalist killed dozens of people as they gathered for weekly prayers in Christchurch. 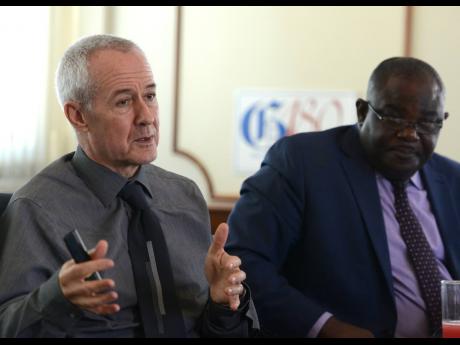 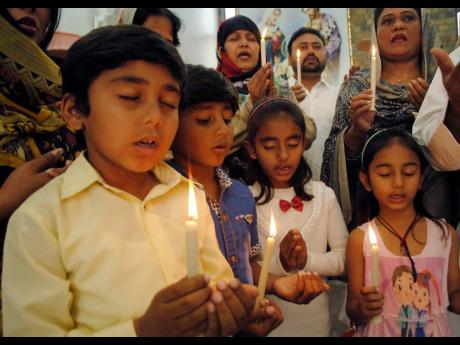 AP
Pakistani Christians attend a special prayer service for the victims of the Christchurch mosques shooting at a church in Hyderabad, Pakistan, yesterday. Pakistan’s foreign-ministry spokesman said that three more Pakistanis had been identified among the dead, increasing to nine the number of Pakistanis killed in the mass shootings at two mosques in the New Zealand city of Christchurch.
1
2
3

The live Facebook broadcast of the mass murder of 50 people and the injuring of around 50 others in Christchurch, New Zealand, last Friday has been cited by Professor Anthony Clayton, chairman of the Broadcasting Commission, as giving credence to a call for social-media entities to face strong regulations locally, similar to proposals now being put forwards by other nations.

Tarrant is said to have posted on social media a 73-page manifesto detailing radical beliefs before executing the massacre. Prior to the attack, he is believed to have posted hints on Twitter of his intentions.

In the aftermath of the massacre, New Zealand Prime Minister Jacinda Arden described it as one of the country’s darkest days.

A document prepared by Clayton and the commission’s executive director, Cordel Green, amended after the incident and which The Gleaner has acquired, pointed to the dangers social media poses globally and locally.

It read: “Brenton Tarrant, who was arrested Friday, was radicalised through social media, published his personal manifesto of hate, filmed and streamed it on Facebook. Technology firms have been struggling to take the material down, because it is being copied and shared across media sites, including YouTube, Facebook and Twitter, faster than it can be removed, which greatly increases the risk of copycat massacres.”

In the document, Clayton and Green noted that the Islamic State terrorist organisation has for years used the Internet to recruit fighters and persuade individuals to carry out attacks in their home countries.

In the New Zealand case, Tarrant had been expressing a white-supremacist, anti-immigrant view.

“We are seeing the first of a new generation of social-media massacres, where people are self-radicalised by following paths that lead from websites that appeal to disaffected youth to sites that encourage hatred and violence and direct it against religious or ethnic minorities.

“If this can happen in New Zealand, one of the most peaceful countries in the world, it can happen anywhere. It could happen in Jamaica, which already has many disaffected youth widely available to weapons and one of the highest levels of violence in the world. This raises profoundly troubling questions about the role of social media in encouraging and channeling extremism.”

The Broadcasting Commission literature outlined that the commission has been developing new models of policy, education, prevention and regulation needed to bring to people’s attention emerging threats in order to reduce the risk of events such as the Christchurch killings happening locally.

“It is important to understand that events like this, ghastly though they are, are just one tiny part of the revolution that is upon us, sweeping away old certainties, structures, systems and models,” read the document.

Since last week’s publication of an article under the headline ‘Social media clampdown’, in which The Gleaner reported that the commission’s document had been submitted to Information Minister Ruel Reid, the commission has been attempting to clear the air with harshly critical Jamaicans, who Clayton said believed the entity wants to “shut down social media” and impede free speech.

On Friday, he was adamant that that was not the case but that the commission wanted to protect citizens by proposing a revamp of the local digital-media landscape and the imposition of regulations.

In addition to the proliferation of hate messages and terrorist organisations recruiting members through social media, Clayton expressed concern about the extent to which children have instant access to pornographic material, violent videos, and images from accident and crime scenes.

He said that he was not proposing a clampdown on free speech, but a shutout of clandestine online activities that may potentially harm the country.