Jamaica in the digital era (Part I) 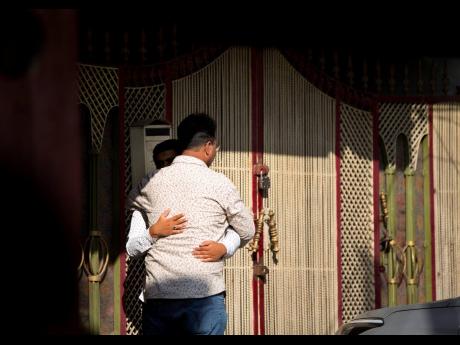 AP
Relatives of an Indian national Ozair Kadir, who was killed in Christchurch mosque shootings, console each other as they arrive at Kadir&apos;s family home in Hyderabad, India, yesterday. Anguished relatives anxiously waited Sunday for authorities to release the remains of those who were killed in massacres at two mosques in the New Zealand city of Christchurch, while police announced the death toll from the racist attacks had risen to 50. 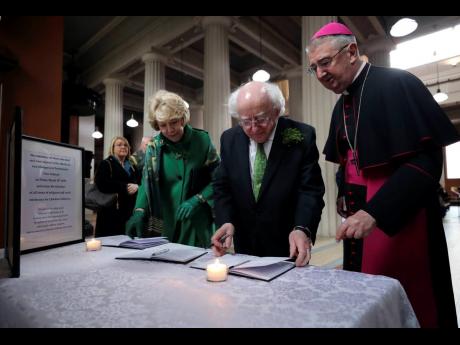 AP
President Michael D Higgins and his wife Sabina sign a book of condolence before a memorial service for the victims of the New Zealand Mosque attacks, at St Marys Pro Cathederal in Dublin, Ireland yesterday. 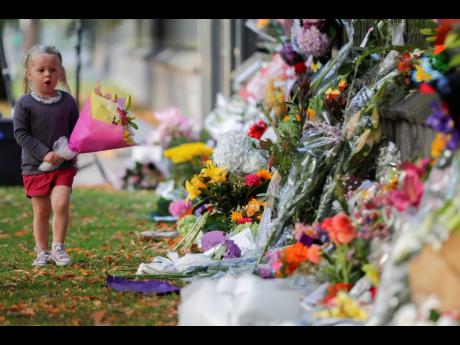 AP
A girl walks to lay flowers on a wall at the Botanical Gardens in Christchurch, New Zealand, yesterday. New Zealand’s stricken residents reached out to Muslims in their neighbourhoods and around the country on Saturday in a fierce determination to show kindness to a community in pain as a 28-year-old white supremacist stood silently before a judge, accused in mass shootings at two mosques that left dozens of people dead.
1
2
3

The following is the first part of a paper updated by Anthony Clayton, chairman of the Broadcasting Commission, and Cordel Green, executive director of the commission, shortly after Friday’s massacre in Christchurch, New Zealand.

Brenton Tarrant, who was arrested on Friday after the murder of 49 people (death toll now 50) in New Zealand, was radicalised through social media, published his personal manifesto of hate on social media, filmed the massacre, and live-streamed it on Facebook. The technology firms have been struggling to take the material down because it is being copied and shared across social-media sites, including YouTube, Facebook and Twitter, faster than it can be removed, which greatly increases the risk of copycat massacres.

Islamic State has been using social media for some years now to recruit fighters and to persuade people to carry out attacks in their home countries. In New Zealand, however, we are seeing the first of a new generation of social-media massacres, where people self-radicalise by following the paths that lead from websites that appeal to disaffected youth to sites that encourage hatred and violence and direct it against religious or ethnic minorities. If this can happen in New Zealand, one of the most peaceful countries in the world, it can happen anywhere. It could happen in Jamaica, which has already many disaffected youth, widely available weapons, and one of the highest levels of violence in the world. This raises profoundly troubling questions about the role of social media in encouraging and channelling extremism.

The Broadcasting Commission of Jamaica has been working hard to develop the new models of policy, education, prevention and regulation needed to alert people to these emerging threats, and thereby reduce the risk that events like the New Zealand massacre could happen here. It is very important to understand, however, that events like this, ghastly though they are, are just one tiny part of the revolution that is now upon us, sweeping away old certainties, structures, systems and models.

The world is being turned upside down by the digital revolution. Media, communications, finance and banking, trade, business and commerce, the relationship between government and citizens, the nature of work, education and training, and most social interactions are all being transformed by the efficiency of digital encoding, the speed of digital transactions, and by the radically new social, economic, business and behavioural models that they support.

This revolution has been liberating and enabling, but – as New Zealand has just demonstrated – it has also brought many serious problems and threats. Jamaica cannot afford to ignore the trend or remain in the slow lane of the transformation, however, as an efficient digital economy is now a primary determinant of the ability to compete internationally. So the challenge facing Jamaica today is to make a rapid transition to the new digital world, seizing the new opportunities but also finding ways to manage the risks and limit the harm they could cause to the nation.

The media and communications sector is a good example of the changes that are rapidly killing the old ways of doing business. In the last decade, technology companies like Facebook, Google and Amazon have captured the market for content and now dwarf all the traditional media companies.

Facebook has over two billion users, but also owns WhatsApp and Instagram with 2.5 billion users, which means that one social media company now manages the interactions of over half the population of the planet. YouTube, which has 1.9 billion users, is owned by Google, which controlsover 75 per cent of all Internet searches in the world. Amazon is the world’s largest retailer, but also controls about half of all cloud computing, more than the next three biggest cloud storage providers combined, and is now bidding on a US$10 billion contract to manage the core information systems for the US military.

So a tiny group of firms now control almost all the public spaces on the Internet where people meet, talk, trade and connect. This is largely because the value of a public space goes up as more people use it, so these spaces have a natural tendency to become monopolistic. The risk of this concentration of influence, however, is the potential for abuse, and extremists, malign state actors, political manipulators, organised crime and terrorist networks are now very active in some of the spaces. Facebook in particular is now subject to sustained criticism for its unwillingness to properly police the public spaces that they control.

When oil and then the telephone companies became monopolies on that scale, governments had to intervene to break up the giant corporations and reintroduce competition to the market. The technology companies, however, have argued that their dominance could be quickly overturned by the next technological innovation, so they are still exposed to competition. Legislators largely accepted this argument until recently, but they are now less inclined to do so in the wake of revelations that social media is being used to spread hate speech, lies and propaganda, and influence the outcome of elections.

As the technology firms have rapidly captured the public spaces, media firms are no longer competing on a level playing field; most of them are nowfighting a losing battle against giant corporations that are largely unregulated and untaxed in most countries, and are capturing most of the advertising revenue. As a result, most of the traditional media organizations are bleeding to death, they are losing their audience and income. Over the last decade, hundreds of traditional media companies around the world have shut down, forced out of business by technology firms that don’t even have an office in the same country.

Jamaica’s media companies are rapidly losing market share to the new content providers. The number of cable users halved between 2005 and 2016 while the audience for Free-to-Air TV fell by nearly a quarter. Partly as a result, revenue has collapsed for most of the players in the broadcasting sector, some of whom have seen their income fall by hundreds of millions of dollars. Local Free-to-Air Television is likely to suffer further loss of both audiences and revenues, because it is heavily dependent on advertising (although it might do better than cable which relies on subscription).

If our regulatory systems do not now adapt, they will make this situation much worse. They were written in the era before the technology firms captured the market and are almost entirely focused on the traditional media as a result. If they are not reformed, they will bring increasingly disproportionate pressure to bear on the dwindling band of traditional media providers, which will encourage even more consumers to abandon them and migrate to unregulated, informal and/or illegal sources.

The move to an all-digital environment (including the switchover to digital television and the roll-out of 5G networks in Jamaica) could give the media companies the opportunity to surge back into the market place and compete effectively again, which is why the Broadcasting Commission and the Spectrum Management Authority are now working hard to accelerate the transition. In both Europe and the USA, the traditional over-the-air broadcasters seized the opportunity provided by next-generation television standards to offer more channels at higher quality and lower cost. If the traditional providers in Jamaica also switch to internet-based distribution, they will at last be able to compete directly with online service competitors. It has become clear that the viability of traditional media providers now largely depends on their ability to monetize content across platforms and develop new sources of revenue (such as mixed models of free-to-view advertising-supported content, a la carte subscription options, and bundling of internet and conventional content), so this is likely to be the way forward for Jamaican media companies.