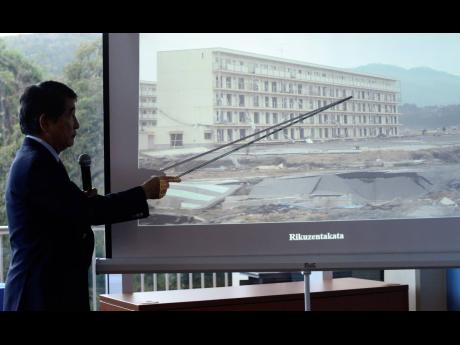 Ian Allen
Yukio Okamoto, a former adviser to two of Japan’s prime ministers, points to the height at which floodwaters reached following a tsunami in Japan in 2011. He was delivering a lecture at The University of the West Indies Regional Headquarters in St Andrew on Friday. 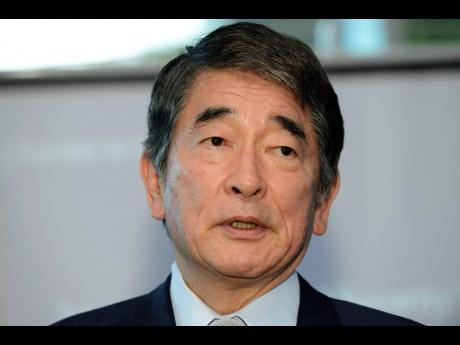 Ian Allen
Yukio Okamoto, a professor of international relations and adviser to two Japanese prime ministers, addressing an audience during a lecture at The University of the West Indies Regional Headquarters in St Andrew.
1
2

Equipment and training to protect the country’s territorial waters and disaster recovery are two areas in which Japan is willing to assist Jamaica, says former adviser to two Japanese prime ministers, Yukio Okamoto.

Okamoto, an international relations professor and author of diplomatic books, was recently in the country at the invitation of the Japanese Embassy to deliver a lecture on security and disaster risk reduction at The University of the West Indies Regional Headquarters in St Andrew.

Speaking with The Gleaner following his lecture, he said: “We have been putting a lot of emphasis on coast guard activities at sea.

“We (Japan) have a lot of experience and a long tradition of our coast guard being like a guardian of other countries, preventing threat and trespassing in territorial waters, that, we could transfer to you, as well as needed equipment. However, you have to be conscious about the need. Only if you want that, Japan could help to prevent maritime crimes.”

The offer from Japan could also assist Jamaica to combat poachers who steal from its territorial waters.

“And, if anecdotal information is anything to go by, this arrest rate reflects only 14 per cent of foreign IUU (illegal, unreported, or unregulated) vessels operating in our waters,” Shaw told a media briefing recently.

Okamoto says Japan is prepared to offer training to further strengthen the capacity of the Coast Guard.

“We could accept Jamaica’s Coast Guard to have training in Japan,” Okamoto disclosed.

He said that his country is also willing to assist with strengthening Jamaica’s response to disasters. An island state similar to Jamaica, he underscored that Japan has vast experience in responding to earthquakes and other acts of God.

Okamoto said that once approval was granted, Jamaica would receive assistance within a short space of time.

“The Japanese government could dispatch a sizeable rescue team that could come one or two days after a mishap. We could send experts, rescue teams, as well as donate necessary funds. Japan places heavy emphasis on these kinds of relief,” Okamoto said.

He noted that the success of Japan’s response lies in “national education”.

“The kids in Japan are taught that these things can happen to you at any time and they shouldn’t count on luck. Also, you have to have [adequate] training exercises beforehand. People must learn to flee danger. Why the tsunami of 2011 took so many lives was because people didn’t know where to flee. They should have gone to the mountains. Instead, they went back inside their houses, even homes on two-storey buildings. They never thought a tsunami would have come that high, but it actually did. Training is important to minimise damage,” he explained.

“Another important point is that some countries require a quarantine for rescue dogs to come in. It will take two or three days to clear dogs. In case of emergency, these things must not happen,” he advised.

“I hope to have opportunities in the future to discuss issues which the island states of Japan and Jamaica are facing,” he said in a statement to The Gleaner.