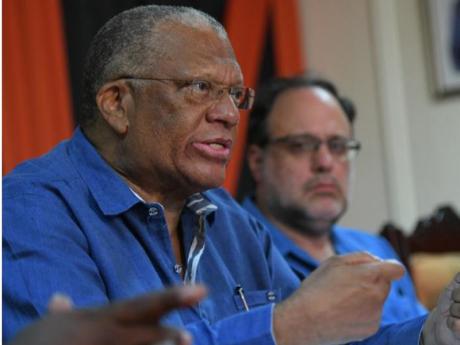 The parliamentary Opposition says it has received reports of financial impropriety and corruption at the Education Ministry and suggested that it is on the same scale as the scandal uncovered at the state-owned oil refinery Petrojam.

Opposition Leader Dr Peter Phillips told journalists today that the allegations “involve specifically” the Caribbean Maritime University and the utilisation of funds sent to the ministry by the HEART Trust for the Career Advancement Programme as well as the Technical, Vocational, Educational and Training (T-VET) Rationalisation Project.

Further, Phillips charged that “politically connected” persons have been employed by the education ministry as advisors, “but are not doing any work.”

“We have information regarding the same set of issues, issues of cronyism, nepotism and corruption, which were manifested spectacularly in the Petrojam scandal, being also present in the ministry of education,” he said during a press conference at the People’s National Party St Andrew headquarters.

“We are very concerned about the reports we are receiving about transactions being undertaken in the ministry of education,” Phillips added.

He called for the Auditor General’s Department to investigate the agencies involved and report to the Parliament and the people of Jamaica.