Another fake Jamaican dentist arrested in The Bahamas, remanded 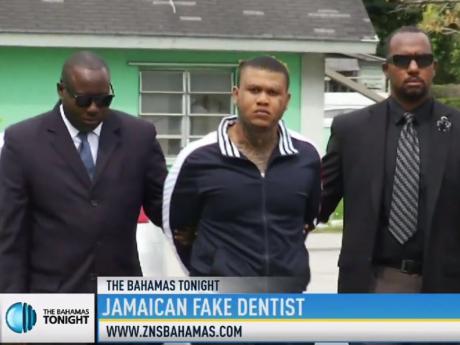 A screenshot from a newscast by ZNS Bahamas.

An 18-year old Jamaican man has been remanded in The Bahamas on fraud charges for pretending to be a dentist.

The accused Juvanie Akino Montague was charged with practising as a dentist, advertising dental services and possession or control of dental appliances.

It is alleged that Montague had been practising dentistry since October 2018.

Investigations by the police led to his arrest recently.

Montague pleaded not guilty to the charges and was later remanded until March 21 with checks to be made into his immigration status.

His lawyers have reportedly argued that he is married to a Bahamian but does not possess a spousal permit.

Earlier this month, Jamaican Santini Kerr-Wilson also known as Nicole Wilson was arrested on fraud charges for pretending to be a dentist.

Wilson was said to be operating from an office and charging clients US$510.

She was fined just under US$7,000 and ordered to repay the complainants or face jail time.