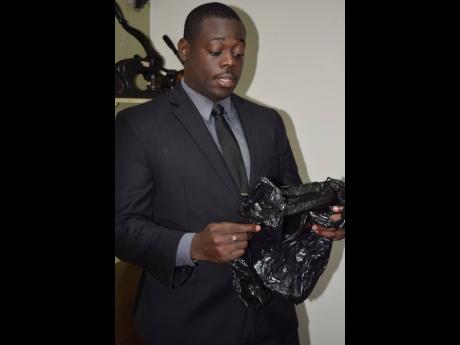 Jordon Freeman, a graduate student at The University of the West Indies (UWI), Mona, wants to be the Jamaican equivalent of Elon Musk.

Musk is the CEO and chief researcher of several companies, such as SpaceX and Tesla, specialising in computing and automotive engineering. Like Musk, Freeman plans to establish his own company and to be a chief researcher.

Freeman is passionate about biotechnology and what it can do to resolve many problems in Jamaica.

“I enjoy finding solutions to problems,” he declared. “Even if I become a business person, I would prefer to create products that can improve the lives of people, while someone else focuses on the operations and the financial aspect of the company.

“I see [Elon Musk] as a role model and I want to accomplish similar things; always innovating and finding ways to make my country a better place,” he said.

Freeman recently won the Vincent HoSang UWI Venture Competition, which was organised by the Mona School of Business and Management. It encourages members of the university community to use their talents to create ideas that can grow into fully-fledged operations. Students from across all five faculties are encouraged to participate. JN Small Business Loans (JNSBL), a member company of The Jamaica National Group, is one of the sponsors of the annual competition.

Freeman won for his innovation ’Bio Plastics’, a biodegradable material that he suggests can be used in place of single-use plastic bags.

“My friends and family members suggested that I create a material that could replace single-use plastic bags, because I am always innovating,” he said. “I ignored it at the time because I did not see the value, and most of my innovations had to do with food. However, I love a challenge and decided to do it.”

Along with two other members of his team, a plan was designed to make the venture a viable one.

“None of us were business students,” he explained. “I was the lead on the project and the other persons are team members. We had no knowledge about the financials. However, we were blessed to meet good people along the way, and we had assistance from one of my mentors, Pastor Karen Davis. A business person, she mentored me in this area, and helped the team night and day to prepare for the competition.

“She didn’t just prepare me for the competition. She gave me tips and pointers in understanding financials,” he added.

The Excelsior High School graduate has plans to manufacture the product on a commercial scale to be a replacement for petroleum-based bags. The concept material is still in the early stages of development. He is, however, unable to publish photos of his project, as it is still going through various intellectual property processes.

Gillian Hyde, general manager, JNSBL, said Freeman’s commitment to developing this bioplastic product is to be commended, and that his determination augurs well for Jamaica.

She congratulated him on his success in the Vincent HoSang Venture Competition.

“I am proud of you, your commitment to implementing this product is commendable. What you are doing will benefit not only our country, as it could become a global game changer. We thank you for your dedication and will assist your team as best as possible.”

Currently, Freeman’s research has been hampered by the lack of equipment locally to be able to conduct further tests. However, he explained that he and his team members are working to tailor the product to be able to produce it on the machines that are in Jamaica.

At the same time, he is confident that this innovative product will eventually become a viable alternative.

A second lieutenant in the Jamaica Combined Cadet Force, Freeman explained that he has another venture to bring to market shortly. However, he was tight-lipped about that product, hinting that it came out of many years of research.

“The response to that product has been great, and we are looking to go to market,” he said. “It has been well received. However, based on where we are, I can’t say too much about it at this time, as we are still in the process of sorting out the requisite documentation.”