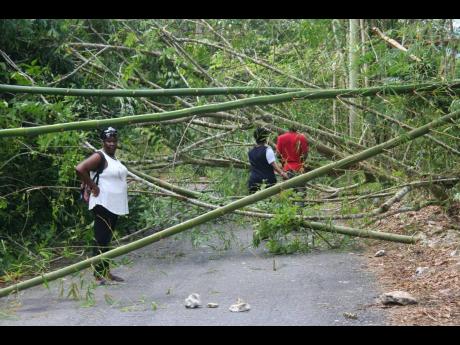 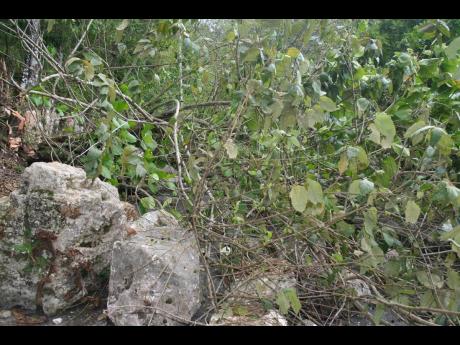 right: Stones and bush were used to block roads in Eastern Hanover. The residents are protesting road conditions and inadequate water supply. 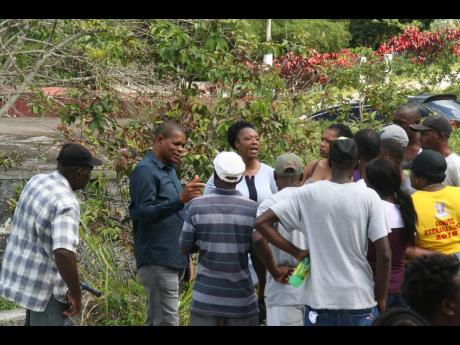 Traffic came to a standstill in several districts of Eastern Hanover yesterday as irate residents blocked approximately three miles of roadway with trees, stones, and rubble in a massive demonstration for better roads and efficient water supply.

The Merlene Ottey High School, Gurney’s Mount Primary School, and the Cold Spring Basic School were all forced to close their doors for the day as the actions of the residents prevented the free flow of vehicular traffic in communities such as Flint River, I-Field, Cold Spring, Gurney’s Mount, Thompson Hill, Old Pen, and Pondside.

According to the residents, the roadway through these districts has been in a deplorable condition for many years despite many promises from the political directorate in Eastern Hanover.

“We fed up, so we decide we have to block it (the road) to get some attention. We not going to stop block it until it is properly fixed,” one resident told The Gleaner yesterday.

Dave Brown, member of parliament for Eastern Hanover, and Devon Brown, councillor for the Hopewell division, both visited the area and tried desperately to convince the residents to clear the roadway with yet another promise that repair works would start by the end of the month.

However, the residents were in no mood for another pledge and made it quite clear that if the repairs did not start by Monday, March 25, the road would be blocked again.

According to the MP, the contract to fix the roads, which is valued at J$43 million, is now before the National Contracts Commission.

“I guarantee you that within six weeks, work on this road must start,” said Brown, to resounding shouts of “No!” from the residents.

Natalee Thompson, principal at Gurney’s Mount Primary School, told The Gleaner that she empathised with the residents as the dual problem of horrible roads and water shortages hits the school and community hard.

“My main concern is that because of the conditions, not only is productivity being affected, but there are also missed opportunities occurring,” said Thompson. “There is no water in the pipes in the area, so people have to depend on harvesting rainwater when available, or buy trucked water, for those who can afford it.”