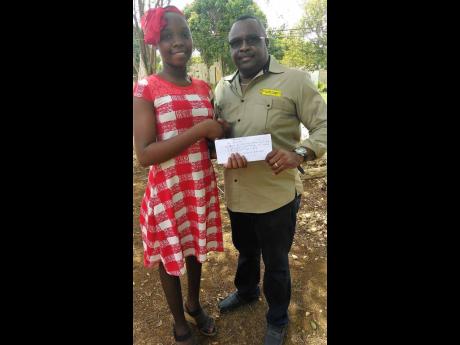 Just a few months ago, 17-year-old Orealia Pink was so depressed that she considered her life not worth living. Saddled with a child without support from the father and no financial assistance otherwise, she looked into the hungry eyes of her child and decided that he would stand a better chance if she was out of the picture.

In a sit-down with The Gleaner, Pink said she knew her mother was trying everything she could to help her, and although her older siblings often encouraged her to “hang in there”, the cry for help from her son was just too much to bear.

Recalling the day she hit rock bottom, Pink said her mother left the house that morning with the intention to “get a money” so the baby could have something to eat.

“She called me and said she didn’t get through, and I started crying. I thought if I killed myself, life would be better for the baby ‘cause then someone would take him,” she said.

Pink said she tied a rope around her neck, climbed up a tree in her backyard, and jumped. But the rope burst.

She fell, got up, and went back into the house for a belt, thinking it would work better.

In hindsight, she now realises that her life has a greater purpose as she said that while she was coming out the house, she bumped into her older brother, who was visiting. She sat inside waiting for him to leave so that she could make another attempt, but he told her that he had had a change of mind and he wasn’t leaving and would instead be spending the night. She said he kept asking what she was up to.

“I didn’t get to do it (suicide) that day, and the next day, I went to a convention that was being held in the area by the Valley of Light International Ministry,” she said.

Tears flowed as the pastor, Bishop Joseph Allen, started preaching about better options than suicide in confronting personal problems. She said she didn’t hesitate when a friend encouraged her to go to the altar when the call was made. She recalls the pastor speaking to her and saying , “Young lady, your struggles are real, you have a story to tell,” she said, saying that the tears fell even more.

Pink said she broke down and confessed that her child was hungry, she couldn’t take care of him, and that she had attempted suicide.

“The pastor started crying and saying no child should ever have to go to bed hungry,” she told The Gleaner.

Pink said that when the service ended, the pastor called her and gave her an envelope with $5,000, telling her that Otis James of the James and Friends Education Programme had offered it to her.

Commenting on his gift, James said that he had mulled over going to the convention that night and must have changed his mind about three times before making his way there.

“When I heard her testimony, I knew why I had to be here,” he told The Gleaner.

Inspired to make a change in her life, he approached a sponsor in the programme, Junior Wilson of Stoplight Wholesale in the parish, and shared her story with him.

Wilson didn’t hesitate, and today, Pink is now attending a prominent high school in theparish, with all her tuition and other school needs taken care of, plus a monthly shopping allowance to meet her son’s needs.

With tears in her eyes, Pink said that she has a new lease on life and can now say that giving up is not an option. Citing regret about her suicide attempt, Pink is now reaching out to persons at low points in their lives who need a mentor. Her advice is that they should look to the friend she has found – Jesus.

“Giving up isn’t an option. It depends on how you fight. You can pray and turn to God, or you can destroy yourself … ,” she said. “I am so glad I failed in my attempt.”

Pink encourages depressed individuals not to bear the burden alone, but to reach out to trusted friends. Thanking all those who played their part in helping to turn her life around, she said she is looking at two career choices –law or nursing – as they are driven by the same motivation to make a difference in the lives of those who need it the most.