Every day is a new scandal! 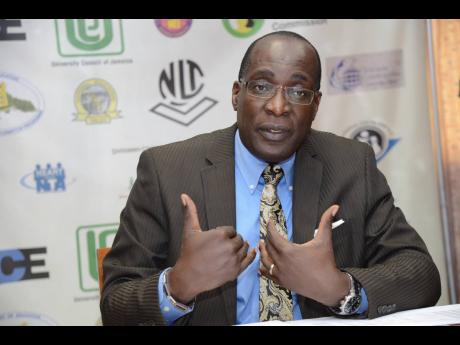 Rudolph Brown
Ruel Reid, who was sacked as education minister on Wednesday.

The Gleaner’s social-media pages have been flooded with reactions to yesterday’s resignation of Ruel Reid as education minister. Reid was asked to resign amid allegation of corruption.

Here are some of the comments received:

For the first time in Jamaica, people are being held accountable for their actions.

These ministers should resign and be arrested, charged and imprisoned. The same crap keeps happening because they are only allowed to resign as if to say, “Oops, so sorry,” and life goes on. And how will the prime minister do his job, if he constantly has to be taking control of these ministries?

Really now! Is it voluntary or was forced to? We need an independent investigator to probe this too of them getting away we have prisons waiting, is the prime minister going to put this one under his arms, too?

These men and women who are voted for by Jamaicans must be held accountable for every single action taken when serving in a PUBLIC OFFICE! For far too long they have gotten away with it, with just being asked to resign or just a simple cover up ... enough!

No sah, JLP full a corruption like how Buju show did full a supporters. One scandal after another ... . The worst part about it is, NO ONE is EVER held ACCOUNTABLE for their crimes, whether JLP or PNP ... .

Well, at least it’s a step in the right direction. I’m only hoping that these people don’t only get to resign, but also pay for their crimes. Clean all of them out @andrewholnessjm, but be careful not to take on too much load, which will affect you doing your job, as something tells me there are a lot more who needs to be out of the Senate and Cabinet.

This is transparency at work ... a very powerful move. Prime Minister, you now run a country where corruption is punishable! A depart from years of PNP where corruption was a norm! We ask for good leadership and good governance now we have it.

I don’t care which Government weed them out. The point is, we the people need to be more proactive in making them accountable for our money. Jamaica is rich but most of us are broke. The next ministry should be health, and bringing the regions who are recruiting people on ridiculous contracts and sending them home after years of service with nothing, and the minister doesn’t have a clue about what is really happening.

I think this is a good move by the honourable prime minister, and I also hope that civil society and special interests groups won’t quick to judge. Remember that someone’s reputation is at stake. I urge everyone to wait until the investigations are completed.

I’m so disappointed in Ruel Reid. These people should be helping to build the country than taking it down. I born and live here and I want Jamaica to be out of the wilderness. Members of Parliament, stop being greedy and desist from wrongdoing.

Me lose track now. From Audley Shaw phone, Petrojam over and over again, and now this and the man resign too, enuh, not to mention the hospital sagas and the government workers wage bill saga, me no like politics, but JLP government come in like one big soap opera. Every time something die down, then the next season start with different drama. It don’t look good and it always blow down with either Andrew a take over ‘cause people did trust him or them say a the PNP fault.

The PM knew of the theft and plundering at the MOE when he stood in Parliament yesterday and had the gall to declare that they have been the best managers of the country? This government is really outrageous!