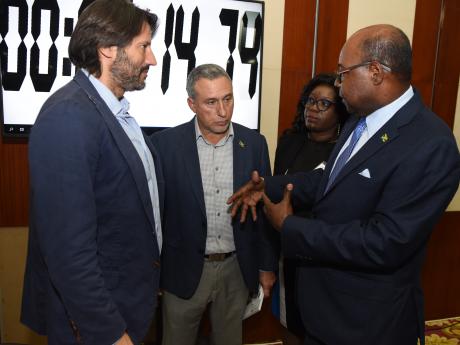 Tourism Minister Edmund Bartlett has revealed that his Ministry’s Tourism Linkages Speed Networking event has resulted in local Small and Medium Tourism Enterprises (SMTEs) negotiating contracts valued at over $630 million, over the past three years.

“I am pleased to share that Speed Networking 2016 resulted in contracts valued at some $181 million; while the 2017 event saw suppliers benefitting from over $200 million in contracts; and in 2018, the value of these contracts grew to over $250 million.  That is over $630 million in contacts for local SMTEs from just three one-day linkages events,” Bartlett said while speaking at this year’s staging of the Speed Networking event in Montego Bay, St James on Wednesday.

He also noted that among the top beneficiaries of the event were Boss Furniture and Tortuga Rum Cakes.

Boss Furniture won a contract valued at $30 million to provide bedding and furnishings to Montego Bay’s new S Hotel while another $10 million in contracts with that property is in the pipeline.

In addition, Boss Furniture CEO Omar Azan is also in negotiation with the Sandals and Hendrickson Groups to supply their properties with locally made bedding and furniture.

Tortuga Rum Cakes also negotiated a $500,000 contract with Half Moon Hotel, from their participation in the event.

The tourism minister noted that the event is a key initiative designed to offer support to SMTEs and helps to strengthen the linkages between tourism and other sectors of the economy, and in so doing, increases the economic impact of the sector.

“The strategy must be to increase the capacity to supply the demands that tourism consumption patterns require and find creative ways of building entrepreneurship among our local stakeholders to fill these requirements. In this way, we will retain more of the revenue generated by tourism in the local economy and stop leakages,” he said.