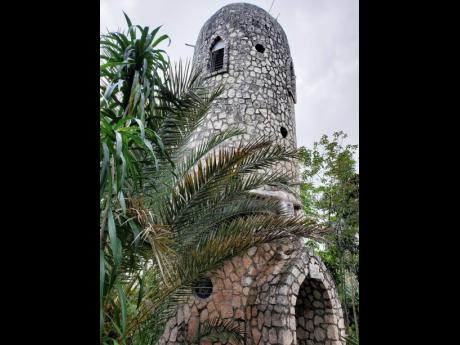 Contributed
This was built in commemoration of Dr. Gruhlke‘s son who died in the 80s.

In the Withorn community is a gem that is filled with phenomenal vegetation and craftsmanship, Mountambrin. It started as a five-acre property that was bought by Dr Rus Gruhlke in 1975, when it was used for residential purposes. It was also once owned by Alex Haley, famous for his book Roots, which has a popular TV adaptation that starring Whoopi Goldberg and Oprah Winfrey. It is believed that Haley, spent most of his time on this property writing it.

Being a lover of art, when Gruhlke started living on the property, he brought a lot of his pieces from his original home town in Seattle to Jamaica.

“Jamaica has become his home; he hasn’t renewed his passport in years. So you know he has no intentions of leaving,” joked Canute Gruhlke, his son, who is fluent in Spanish.

Located 40 minutes from the Westmoreland main road, which runs from Bluefield to Wakefield, there is a pathway that leads to Montego Bay. After driving on this road for 20 minutes, you turn right at a Y junction, where you continue on a sinuous uphill road for the rest of the journey. Luckily there are signs along the way to ensure you don’t get lost.

Once on the property, the beautiful property sits on a hill and gives guests a breathtaking view of Savanna-la-Mar as well as the Caribbean Sea. This is a haven for nature lovers, especially when listening to the different species of birds fly though the properly. The most popular are the hummingbirds and the woodpeckers, who are constantly at work, building their homes.

“We have many birds that Jamaicans are familiar with, like, white belly, ground dove, nightingale, hummingbirds and many migratory birds this time of the year. We also have seven dogs not only as pets but as guard dogs, five German Shepherds and two Rottweilers,” stated Gruhlke.

All the buildings are on an incline that includes a recently paved driveway, which takes you past the theatre on the left. It houses numerous paintings in a creative space, which incorporates light fixtures made from wood, and walls with bottles in them for added illumination from the sun. There is a concentric stairway to get to the ground floor which has the dining area and the performance stage.

“The Theater\gallery was built in 2005 and we made sure the Acoustics is wonderful, there are also sculptures and paintings all over” he continued. Gruhlke noted that performers from all over the world have performed there.

Eating from the land

This mostly self-sustained property boasts a variety of fruits, which the resident chef uses in all the meals that are prepared.

“Our menu is from farm to table, so it varies depending on what is in season. We also try to enhance our dishes by using herbs and spices.

I have travelled and lived in South America, Central America, the USA and Canada, so I have had the opportunity to sample various cuisines. I have tried Chinese, Korean, Ethiopian, Thai and Vietnamese [food].

“All this was made possible, because I lived less than one mile, from what is known as the (International District) in Seattle, Washington ,” stated Gruhlke.

The property has endless potential and the staff of about six persons, does everything from landscaping to electrical work.

Now the main thing for them is to do more planting as Canute believes the land is very fertile.

“About four years ago, we bought the adjoining property, which we have turned into an agro\forestry site. We have planted 1000 Mahogany Trees, 1,500 breadfruit trees, many avocado pears, jackfruit, cedar, soursop and much more.”

For guests, who usually access the property through Airbnb, it is a relaxing environment where they can be one with nature.

“We get a variety of guests. We recently had a young couple from as far as Germany, as well as a lot of persons from North America.”