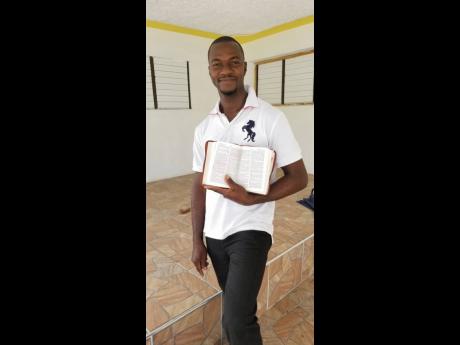 There’s always something intriguing and highly admirable about a man who has fully decided to walk with the Lord, dedicating his time and resources to God’s service.

Such is the story of Denver Skervin, who told Family & Religion that God has saved his life and delivered him from too many demonic attacks for him to look the other way.

Admitting that things are not always glossy on his side, he retained that God’s faithfulness is unwavering.

“I remember when I was about 19 years old and was working at a hardware. One Wednesday after working, while heading home, I suddenly took sick.

“It was like my body was shutting down, slowly, I was weak and experiencing very high fever.

“I had a piece of chicken and some rice, but I didn’t have anyone around me to look after it, and I could hardly move. God bless this old man named Brother Jay, who I saw and asked him to cook it for me. He could only manage to boil the chicken and rice together, and I gave God thanks and ate,” Skervin began.

He said that he realised that days were passing and he wasn’t getting any better. In fact, according to him, he began to ‘taste death’.

“It was the Sunday evening when I felt as if I was on my last and still no one around me. I lay down on my bed and decided to lift my faith to God. After calling out to Him, I was instantly delivered. I mean the same moment,” he said, adding that the fever left, the weakness faded and he began regaining his strength.

Though Skervin wasn’t a Christian at the time, he said that he recognised the sudden illness as a demonic attack from which he was delivered, upon reaching out to God.

He continued, “When I recovered, I got up immediately and put myself together and found myself in a church where I sat around the back. A church sister who had the mic addressed me saying, ‘Young man sitting around the back, get up and tell the congregation what God just did for you’.

“I was playing stubborn as if I didn’t know it was me who she was talking to, and she repeated herself, this time being more specific, calling out the colour clothes I was wearing.

“When I got up and gave my testimony, and without me telling them what I thought was the reason for the strange and sudden sickness, the church confirmed that it was indeed a demonic attack, something they had picked up in the spirit.”

That incident, according to Skervin, is but one of his many encounters with demonic forces that have tried to end his life, but thanks to God’s mercy, all efforts were unfruitful.

“I share my testimonies with others because I want people to know that there is a God and though we can’t see Him, we can feel Him and I, myself, have proven Him many times.

“God is good! And now I have dedicated my life completely to Him. I say ‘God, I want to die serving You and I’m not returning back to where I’m coming from’.

“I now have three sons, all of whom I try to encourage and to tell them about the goodness of God. I just want to be an example to my family,” he shared.