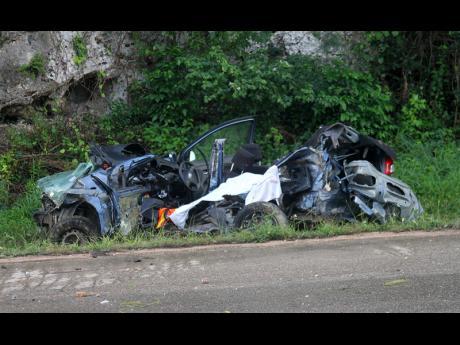 Jamaica is on the verge of recording 100 road deaths since the start of the year.

According to figures released by the Road Safety Unit in the Ministry of Transport, 97 persons have died in 87 fatal crashes since January 1.

This represents a 47 per cent jump in fatal crashes and a 39 per cent increase in road deaths when compared with the corresponding period last year.

At this time last year, a total of 70 persons had died in 59 fatal crashes.

The figures revealed, too, that there has been an increase in fatalities across nearly all categories of road users, including a 150 per cent spike in the number of motorcyclists killed on the nation’s roadways.

Up to yesterday, 30 motorcyclists had died in motor vehicle crashes this year, compared to twelve over the similar period last year.

The Road Safety Unit says six children have died on the roadways so far this year, up from three for the corresponding period last year.

Twenty-one pedestrians have died in motor vehicle crashes this year, an increase of 40 per cent when compared to the 15 recorded for the similar period last year, the figures show.

St Catherine leads all parishes with 13 road deaths so far this year followed by Westmoreland with 12.