Taneisha Smith hanging by a thread of hope 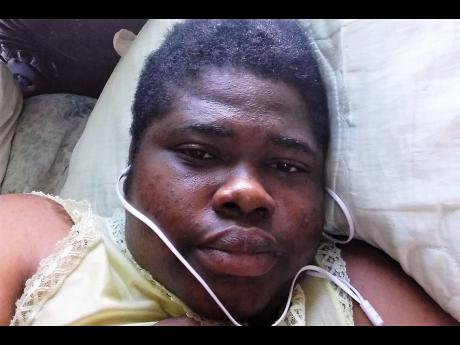 It has been a long, rocky road for 28-year-old Taneisha Smith, and, the bumpy ride doesn’t seem to have an end in sight.

Two years ago, Smith was diagnosed with stage one endometrial cancer, resulting in her doing a total hysterectomy with a bilateral oophorectomy, which is the removal of the uterus, cervix, fallopian tubes, and ovaries. She barely had time to recover from that surgery when a mass was discovered in her left breast. An MRI and a biopsy confirmed that it was pre-cancerous. In December 2017, she did a lumpectomy, followed by external radiation.

However, last July, Smith’s world was rocked again with the discovery of a tumour on the right side of her abdomen. The cancer had returned!

She did an operative laparoscopic surgery.

It was a rough road, with her battling pain and discomfort and just being drained physically with the many treatments she had received.

On the road to recovery and finally thinking that everything was going to be all right, last December, days after celebrating the festive season, Smith noticed signs on both her breasts that something was wrong.

A breast self-exam revealed a mass.

“I panicked as I knew what I would be facing,” said a dejected Smith. With all her financial resources long depleted, she is now reaching out to the public in the hope that some good Samaritans will help her in the fight to stay alive.

Her worst fears were confirmed last Friday when she did the MRI that showed that she now has stage two triple-negative breast cancer.

“Yes, I cried, then I prayed and gave it to the Lord as it’s His battle. I’m just the sacrifice,” she said, adding that she is hoping that this will be her final fight with cancer.

Smith is set to begin chemotherapy to shrink the cancer before proceeding to double mastectomy.

She told The Gleaner that a rough estimate given to her by the University hospital of the West Indies to do the procedures is a little over a half a million dollars.

Smith has created a Go fund me page in her race against time to get the treatment she needs.

“Treatments, both cancer and medical, have gone beyond my target. I have been so distraught, but have to stay strong for my one and only child. I am grateful for life to continue fighting for my daughter,” she said.

Smith said that it breaks her heart that her nine-year-old daughter, Hailey, has to see her in so much pain and unable to help herself at times.

“Sometimes I get so overwhelmed, and wish I had emotional and physical support around me. I cry and pray every night for strength to continue this fight, to be here, to live to see my princess grow up,” she shared.

Smith said that although she has her weak moments, she is still resilient in continuing the fight.

“I just need someone to get in the ring with me, help me to beat this thing by getting the procedures done,” is she said.