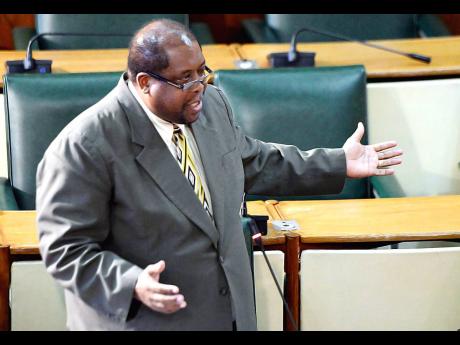 The Opposition is ratcheting up pressure on the Government to provide answers to further allegations of misappropriation of public funds and nepotism at the Ministry of Education and associated agencies while Ruel Reid was minister.

Pointed questions were directed at the Government on Friday during the Appropriations Bill debate in the Senate, led by Opposition Senator Lambert Brown, who sought answers to allegations of cronyism.

Brown quizzed senators on the Government side on a litany of issues, telling them that “these were questions the people out there want answers for”.

“What I am going to do today is to ask some questions for which the people of Jamaica require some answers, and I am going to start with a simple one,” he said, before reeling off one question after another.

Brown said that he wanted to know how a politically connected person, who has a murder charge pending while out on bail, could be allowed to head a government board.

“How can someone who is on bail awaiting trial for murder continue to be the head of a government board? How can that be? More so, a school board over which the teachers have been protesting,” he said.

Brown continued: “How can it be, somebody charged for murder, not only chairing a school board, but taking day-to-day charge of the school? I call upon the minister acting in the capacity as minister of education to change that.”

Still seeking answers, Brown raised yet another question, asking about the $11 million from the government of Japan to an east Portland school to be used to construct two classrooms, about which, according to him, the member of parliament at the time knew nothing.

“There is a primary school in Fair Prospect, east Portland, to which $11 million was given them last year March by the Japanese government to build two classrooms to move the children out of the ‘chichi’-infested place.

“It was given outside the knowledge of the member of parliament. The cheque was handed over in the presence of a political activist, who is now the candidate out there. I want to know what has happened to that $11 million,” Brown said before he was interrupted by government Senator Matthew Samuda, who sought to address Brown on the question.

Brown, however, would not relent, telling Samuda: “I don’t need an answer from you now. When I done talk, you can give the answer when it’s your turn to speak.

“But I want to know about the money and how you can start to build classrooms without permission from the parish council. So what is happening to that money in east Portland, the $11 million given by the Japanese to the Fair Prospect Primary School?”

This time, Samuda challenged Brown on a point of order, stating that Brown was making misleading statements and assertions that needed to be addressed.

“The point of order is that his statements are misleading because the classrooms have not yet started to be built. The old rooms that are in the place have been demolished, and we are awaiting parish council permission to do the construction that’s necessary. The money is housed at the Ministry of Education,” Samuda said.

But his explanation did little to satisfy Brown, who asked why the MP hadn’t been notified about the matter.

“Why you go around the MP to some caretaker? That is the type of corruption that’s hurting the country, and I make that very clear,” he said.

Delving even further into the list of prepared questions, Brown asked whether the 50th birthday of the former minister of education was hosted on a yacht in Port Royal by the Caribbean Maritime University (CMU).

“And if so, what was the cost of this party? We heard about Wakanda party, topsy turvy cake party, now we hearing of yacht party in Port Royal for Minister Ruel Reid’s 50th birthday. What’s the story with that? What’s the cost of that party? Who paid for it?

“Are there relatives of the former minister on staff at the CMU? When were they hired, and what were their qualifications for the position that they are in? The people want to know,” said Brown.

He also asked if there were any personal staff members of the former education minister being paid by CMU that were funded by this budget or any entity associated with the CMU.

“People want to know also, Mr President, if there are any spouses of any Jamaica Labour Party MPs employed at the Ministry of Education or any agency that reports to the said ministry, and if that is so, what was the process used in hiring them because other people want jobs, too,” the Brown stated.

Not providing any ease for the government senators, Brown charged on, questioning if any resources of the CMU had been diverted to construct the home of a senior CMU official in the eastern end of the island.

“The people want to know these things, because, you see, Senator Charles, what we are looking at here is that the new Jamaica [that you talked about] is mired in corruption. This new Jamaica stinks to high heaven with corruption. Mr President, I hope the people will get answers,” he said.