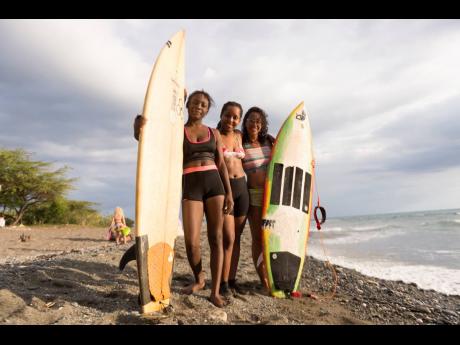 Gladstone Taylor
From left: Ramona Webley, Imani Wimot, and Khara Perkins at the place where they lose and find themselves again. 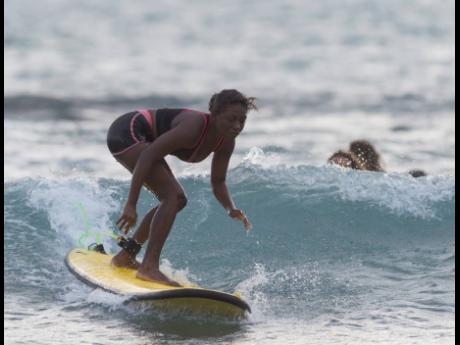 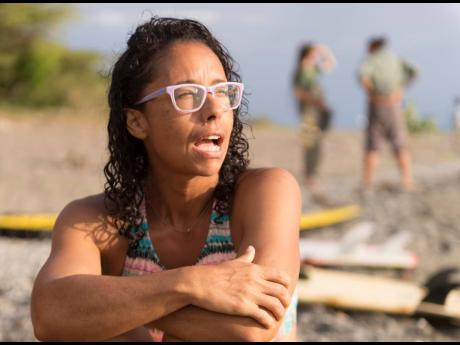 Gladstone Taylor
AT LEFT: Surf girl Khara Perkins explains what surfing means to her and how the activity helps her to disconnect from the world.
1
2
3

For some, it’s a career. For others, it’s a great way to pass time. But for the women who flock to Eight Miles, Bull Bay, surfing is therapy – every incoming wave an opportunity to ride the crest of new problems and claim new victories.

Surf Girls Jamaica is a group of approximately 10 women of varying ages, formed by Imani Wilmot, daughter of well-known Jamaican actor, musician, and surfer, Anthony ‘Billy’ Wilmot. It’s dedicated to teaching girls to surf and to providing a community an outlet through which they can bond and work through issues.

“Women come with varying issues such as body issues, [low] self-esteem, to abuse. There are a whole lot of things, but funny enough, we don’t really talk about them directly unless people want to talk about them,” said Imani. “The help comes from through the community, where everybody is supported,” she added.

Wilmot, 28, manages Jamnesia Surf Camp, also in Bull Bay, and teaches surfing. She learned to surf when she was eight years old and was inclined to follow in the family ‘business’ that she saw her four brothers and father doing it.

“After doing it for about six or seven years, I started noticing that it was the same girls surfing every time. It was just, like, five of us in all of the surfing competitions, and the results are usually the same, with nobody to push you.

“I actually stopped surfing because I just got demotivated, and couple years after that, I was, like, if I want more girls to surf with, I will have to teach them. So originally, I started a programme called Surf Like a Girl, which was a one-week summer camp, just teaching girls to surf. A year ago, we started the Surf Girls team, which we are working on, and we train every Sunday, whether there are waves or not,” said Wilmot.

Khara Perkins and Ramona Webley are part of the Surf Girls team and attest to the healing therapy of surfing and the joys of sisterhood.

Perkins, 41, is originally from California in the United States, but she has been living in Jamaica for more than 10 years. She teaches yoga and manages a retail store in Kingston.

“I grew up on the beach. It was a childhood dream. Surfing becomes a way for me to connect more to my children and their father, and it’s therapeutic. The water is healing in and of itself, having the support of each other and just being with nature,” said Perkins.

For 17-year-old Webley, who recently moved closer to the area, she found surfing to be more than a pastime she enjoys.

“I see them surf all the time and I just decided to try it out. I realised that school was stressful, and during surfing, it forces me to stop thinking about school,” said the teenager. “You have to concentrate on the water, on the waves. It just puts you in a state of mind where you are not thinking about anything else.”

Wilmot has taken Surf Girls Jamaica to the screen and was recently featured on the Real Stories documentary series on YouTube. The film also won the Best British Film at the 2018 London Surf Film Festival.

The film features other females from the camp and includes a surfer who was convicted on drug-trafficking charges. She said she has turned to surfing to find back self-worth.

“The feedback has been positive for the most part. A lot of people are seeing a side to surfing that they don’t normally see because I think, usually, when you think of a surfing film, it’s like a bunch of guys driving around being macho and trying to surf the biggest waves.

“This documentary is more about the personal side of it. It’s very gentle, and it shows that surfing is something that is very nurturing, if you allow it to be, and it focuses on how surfing can be a good tool and to help you to cope, to heal whatever it is that you are going through,” said Wilmot.

Wilmot said persons wanting to learn to surf can join them every Sunday. Recruits don’t even have to know how to swim, though it’s recommended, and life jackets are provided, if needed.

“We don’t really charge for the Sundays, but you can give a donation. A one-on-one lesson costs $3,000 or a two-for-one at $5,000. A lesson is for one hour, and the cost of the lesson includes the board as well, and we just ask that you call us the day before and check because you don’t always have waves,” said Wilmot.

Summer surf camps are held in June, July, and August.