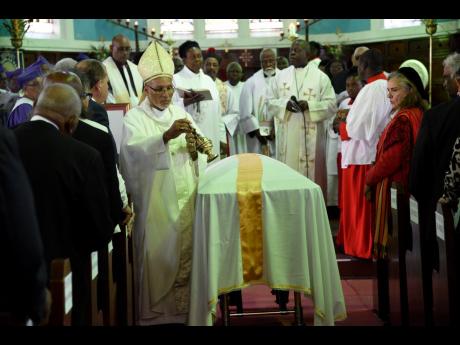 Mark Titus
Howard Gregory, Bishop of Jamaica and the Cayman Islands, performs the final rites at the funeral of Dosel Owen ‘Hurry Hurry’ Sinclair at the St George’s Anglican Church in Savanna-la-Mar, Westmoreland, on Saturday.

Tributes filled the St George’s Anglican Church in Savanna-la-Mar on Saturday as former Custos of Westmoreland and Member of Parliament Owen ‘Hurry Hurry’ Sinclair was laid to rest.

Former Prime Minister P.J. Patterson, in his ­tribute, described Sinclair as a first-class politician and ­humanitarian, who served as member of parliament for Western Westmoreland from 1972-1976.

“He was a first-class political representative, but electoral politics was too much of a straight jacket for someone with such restless energy and a man whose generosity goes way beyond the traditional confines of any political prison.” said Patterson. “Dosel Owen Sinclair is a fine example to many that dedication and work are essential for success.”

In his message, read by Custos of Westmoreland Reverend Hartley Perrin, Governor General Sir Patrick Allen lauded the former custos for his selfless service to the people of Jamaica.

“He served with great distinction … his energy, sense of commitment and his people skills shone through his service as a custos, contributing significantly to the respect and love he received from his parishioners, as well as his colleagues and business associates from far and wide.”

Among the other politicians in attendance were Minister of Industry, Commerce, Agriculture and Fisheries Audley Shaw, who was representing Prime Minister Andrew Holness; MP for Western Westmoreland Dr Wykeham McNeill, as well as the MP for Eastern Westmoreland, Dwayne Vaz.

The funeral was also attended by several representatives and children from the Clifton Boys’ Home and the Llandilo School of Education, which were heavily supported by Sinclair.

The former MP and custos was also the proprietor of Sinclair’s Bargain Centre in Savanna-la-Mar, which has 15 other locations in eight parishes.