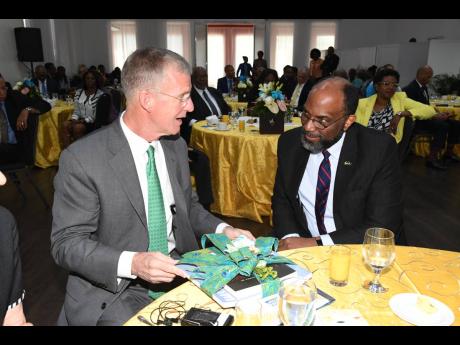 Retired four-star United States Army General Stanley McChrystal says leaders must be careful to ensure that their organisations, on a whole, are achieving their ­purposes, irrespective of the greatness of the individual teams and units which make up the entity.

The four-star general was ­speaking to leaders of The Jamaica National Group and other ­private-sector entities at a breakfast, which was held recently at the Spanish Court Hotel in New Kingston. He was on a one-day visit to Jamaica at the invitation of the JN Group.

“From the outside we have this extraordinary dream team, but when you get close, for all the ­talent, we are less than the sum of our purpose; because we are each so great, we have a tough time being great together,” he ­underlined, describing the ­unpreparedness of the US military to deal with what he described as a new-age Al Qaida in 2003 to make his point.

General McChrystal explained that leaders should be able to identify when organisations need to change, and lead that change, so that the organisation remains successful.

“We did OK up until 2003 because we fought in small operations of wars, where we could use part of the force,” the general stated, reflecting on his own leadership of the joint armed forces which captured Saddam Hussein in 2003 and later, in 2006, removed the Al Qaida leader, Abu Musab al-Zarqawi.

“In 2003 in Iraq, we ran into something bigger … and that was Al Qaida in Iraq. [It was] a completely different challenge, because it wasn’t like Al Qaida was formed in 1988,” he explained. He described Al Qaida in Iraq as an information technology-driven organisation, that changed on an ongoing basis.

“It [Al Qaida] was a new-age, 21st-century organisation that operated with a decentralised, constantly adaptive, structured mindset,” he explained.

Therefore, to defeat Al Qaida in Iraq, the armed force that General McChrystal led had to change. Remaining the same was not an option.

“Like competition in the ­business world, a big ­company feels very good for 150 years, because it’s done really well; and ­suddenly you have all these small start-ups. They don’t seem ­coordinated – they are not ­technically coordinated, but their actions are coordinated,” he pointed out.

He underscored that, in these circumstances, leaders need to empower their charges to make decisions, instead of taking on problems that they are not close enough to, or even qualified to resolve. Reflecting on his ­ascension to his role as commander, General McChrystal explained that when he recognised that the course of action being taken by the force was not working, he focused on providing leadership to his men and empowering his team.

“All I can do is think about that what we are going to be is ­different, and we are going to take whatever it is to win; but you’re going to figure it out, not me. I’m going to enable, I am going to cajole, I am going to push, I am going to do all I can as a leader; but, if you’re looking for me to hold up a torch and lead the way, I’ve got no clue,” he said. “Because you down there are closer to the problem. You deal with it, and, therefore, you have a ­responsibility,” he maintained.

He said leaders should develop a habit of forgetting about their egos and allow their people to do what is necessary, trust their judgement and support them, even when their decisions are bad.

Responding to a question about how to achieve that, General McChrystal simply harked back to his military experience and ­highlighted an approach he took with his men in Afghanistan:

“If when you get on the ground, the order we give you is wrong, [then] execute the order you should have,” he quipped.