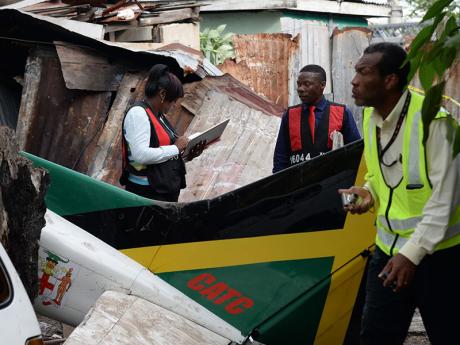 Investigators at the crash site in Greenwhich Town, Kingston on November 10, 2016 - File

The long-awaited report into the deadly 2016 flight school plane crash in Greenwich Town, Kingston has revealed that the Cessna aircraft lost power shortly after take-off because the engine was fitted with wrong and malfunctioning parts. Student pilots Danshuvar Gilmore and Ramone Forbes and their instructor, Captain Jonathan Worton, all died when the Caribbean Aviation Training Centre plane went down on the afternoon of November 10, 2016, seconds after taking off from the Tinson Pen aerodrome on Marcus Garvey Drive in Kingston.

The plane immediately burst into flames on impact.

An excerpt of the post mortem assessment included in the crash investigation report indicated that the three pilots died from shock, haemorrhage, trauma and multiple blunt force injuries due to the collision of the aircraft with the ground.

Based on the report, it appears the November disaster was bound to happen at some point.

It said investigators discovered that a tooth was missing from an engine part. This threw off the timing mark on the starter ring gear support assembly and resulted in a loss of power.

In addition, investigators found that the wrong number two intake valve was fitted to the aircraft and parts of the camshaft were extremely worn and corroded. The report stated that the engine of the Cessna aircraft manufactured on March 31, 1978, was overhauled on June 17, 2014 by One Stop Aviation.

However, despite numerous requests by investigators to the flight school for a release certificate, or the work order, none was produced.

Eventually, investigators contacted the repair station itself for a copy of the work order.

"In their response it was reported that the maintenance entry was forged and that they did not have any information regarding the engine."

If this is true, it would mean that no maintenance was done by the certified company.

Meanwhile, investigators said the decision of the pilot to continue the take-off phase after experiencing partial loss of engine power also contributed to the disaster.

THE ANALYSIS IN A NUTSHELL

Pilot Decision Making
The pilot’s decision to continue the take-off phase of the flight after experiencing a partial loss of engine power shortly after lift-off along with the decision to turn the aircraft rather than the accepted practise of maintaining a flight path straight ahead adversely affected the outcome of the flight resulting in a stall caused by failure to maintain airspeed.

Aircraft Performance
1. From the information provided, the aircraft was below the maximum weight and the centre of gravity was within the limits as set out in the aircraft type certificate data sheet. The statements provided by witnesses indicated that the aircraft’s rate of climb and speed were slow and that shortly after the aircraft made a left turn, it rapidly rolled off on a wing and descended steeply to the ground in a near vertical flight path, consistent with a stall.

2. Internal timing incorrectly set between crankshaft and camshaft by one full tooth, the condition of the camshaft and tappets were severely worn and so the engine did not have the potential of making the specified horsepower of 160BHP at 2700 RPM. There was no evidence of any airframe or control malfunction during takeoff and subsequent crash.

Human Factors
1. A review of the medical history and clinical findings at last aviation medical examination of the instructor, student pilot and passenger revealed nothing of significance that could reasonably contribute to sudden incapacitation or error of judgement during flight.

Jamaica Civil Aviation Authority Safety Oversight
1. The lack of written guidance procedures for the certification of approved training organisations impaired the Flight Safety Division’s ability to evaluate the effectiveness of the approved training organisation policies, methods, procedures and instructions as described in its manuals to determine if it had demonstrated its ability to comply with the regulations before beginning its operations.

2. The Flight Safety Division’s procedures did not include any instructions for the inspection of an aircraft and its records prior to the aircraft being added to the approved training organisation’s operations specifications.

4. Flight Safety Inspectors were assigned tasks for which they had not received the required regulatory training and qualifications.

Caribbean Aviation Training Centre
1. The lack of the full complement of key management personnel who were qualified and competent, particularly with regard to the Chief Flight Instructor & Assistant Chief Flight Instructor adversely affected the organisation’s ability to ensure continuity of supervision of its flight operations.

3. The centre's lack of quality assurance procedures and a Quality Assurance Manager impaired the its ability to monitor compliance with and adequacy of its procedures required to ensure safe operational practises and airworthy aircraft.

4. The vacancy of the Maintenance Coordinator position impaired the centre's ability to ensure timely and satisfactory completion of all aircraft maintenance related activity and compliance with the airworthiness requirements of its aircraft.

5. The decision by the aviation training centre to conduct maintenance on its own aircraft was contrary to the policies and procedures set out in its Air Training Organisation Manual.

6. The training centre did not have a Director of Maintenance or a Chief Inspector at the time of the accident.

7. The absence of Maintenance Director adversely affected the centre's ability to ensure the satisfactory and timely completion of aircraft maintenance functions required in accordance with the maintenance programme for its aircraft.

8. The absence of the Chief Inspector adversely affected the centre's ability to monitor that its activities were being performed in accordance with the maintenance requirements and accepted procedures.