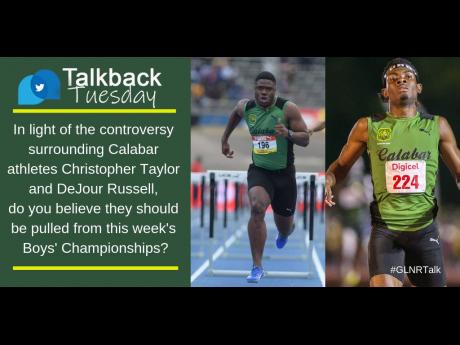 I think a compromise should be reached. Allow both to participate on condition that they make a sincere ­public apology to the teacher, the school, admin and supporters. After Champs, they should be required to attend mandatory counselling. In the end, they’re students. @Ja4jamaicaJames (Jamie Anderson)

If the facts and school regs support that decision, the school should have made the decision a long time ago on principle. Doing it now would just be bowing to pressure. The boys have already gotten the wrong message. Regulate Jamaica! You have most of the island swimming in blood and filth ... . @haughtonnw (Norman W. Haughton)

No innocent until proven guilty. These are allegations thus far. This is from December. Why wait till March? Comments are based on what I have heard in the media thus far. Just as the opposition propoganda machine is ­broken down on social media, they cannot get any traction. In comes the knight in shining armour to police the sites. Your undercoat is showing. @GreggMarsha (Kamay Gregg)

So the boys’ lives should be destroyed on the basis of what one person, whose version is obviously not objective and whose own actions from day 1 are ­questionable at best, says. But it’s ok ... . Go right ahead. Let’s free Kartel while we are at it. I mean, there was nobody. @AGrinestone

Ruel was pulled. They should [be] until the investigations are through. @RyRyWilson3

They should be pulled. Time for us as adults to stop this craziness. We are not doing these children any good to not ­discipline them for this. They need to ­apologise if they are wrong to the ­teachers, school body and the whole Jamaica for this! @fabuliouz24

Actions have consequences, a lesson that needs to be learned. @awitter50 (Ann Witter)

It doesn’t matter ... they won’t be. Excellent athletes. I don’t know if it’s true or not ... but Ruel Reid had to step down amid investigations they should be pulled, too. But it won’t happen. @Zuchi_sbcr (Alec Jackson)