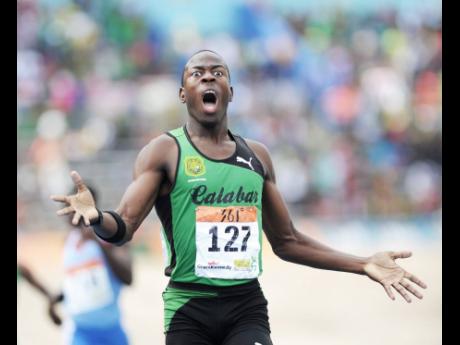 Without a doubt, Calabar High School and Kingston College (KC) have dominated the male side of the ISSA/GraceKennedy Boys and Girls’ Athletics Championship since 1999. With eight wins apiece, Calabar and KC match each other year after year with magnificent teams.

The rivalry delights fans, fills the National Stadium, and holds fans around the world spellbound. Interest is heightened because it is often the case that when one of those schools win, the other is close behind. In the 20 editions of the merged Boys’ Championships and Girls’ Championships, KC and Calabar have finished first and second in some order on 11 occasions.

Two of those one-two results were resolved in the very last race. In 2009, KC edged away to a 223.5–222 point victory when Andre Peart ran the decisive leg in the 4x400 metres relay. He didn’t win, but kept close enough to Calabar captain Ramone McKenzie to turn the tide.

Calabar returned the favour in 2017, leaving KC far enough behind to secure a three-point winning margin in a hotly contested and sometimes controversial classic.

Many schools perform well at Champs, but fans know that Calabar versus KC is like Barcelona versus Real or Kenya versus Ethiopia.

When KC triumphed in 2001, it ended an era of dominance by Jamaica College. The ‘Purples’ won all the way to 2007, and then Calabar stopped that streak. After that famous 2009 win, Wolmer’s Boys’ triumphed in the Centenary Champs of 2010 and Jamaica College returned to the top in 2011.

Since then, Calabar has won every year, with KC second six times. As each school spurs the other on, Calabar has set 11 of the 42 records available and KC five.

Heroes have emerged on both sides of the fence. McKenzie delighted fans and foes alike in 2007 with his lens-less class, and in 2008 with a Batman mask. He wore those props en route to a Class I 200-400 double and two 400-metre wins in Class I.

Not surprisingly, the two individual scoring giants of the 1999–2018 period are from these two schools. The versatile Clive Pullen of Kingston College campaigned mainly in the jumps until 2013. In that year, he became the first Boys’ Champs competitor to score over 100 points. Two years later, Calabar’s sprinter-hurdler Michael O’Hara joined him in this elite category.

Recently, the atmosphere between KC and Calabar has been edgy. In 2017, the arrival of Ugandan distance find Aryamanya Rodgers sparked arguments about his eligibility, and Calabar protested by returning the Mortimer Geddes Trophy, the symbol of supremacy in high-school athletics, on foot to the ISSA office on Lindsay Crescent.

Even in this atmosphere, there have been tangible signs of mutual respect. Speaking to the media after his 2018 win in the Class I 100m, Calabar’s Tyreke Wilson described KC’s Jhevaughn Matherson as a friend and wished him well. Today, they are teammates at the same US university.

For years, friendship was evident between Calabar’s Fedrick Dacres and Chadwick DaCosta of KC. Dacres did the Class I discus and shot put double in 2012 and 2013, but DaCosta was never far off and pushed the tall Calabar to a shot put record of 19.29 metres.

There is one final note on how good Calabar and KC have been in the last 20 years. Calabar has four of the five highest team scores at Champs, headed by last year’s record total of 368.5 points. In the middle of those big numbers by Calabar is Kingston College at 314, the tally that took second place overall in 2017.