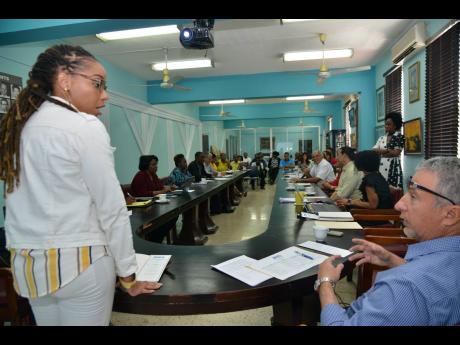 Kenyon Hemans/Photographer
Metry Seaga (right), president of the Jamaica Manufacturers and Exporters’ Association (JMEA), and JMEA Executive Director Imega Breese-McNab at a meeting with food and beverage industry stakeholders on March 5, at the JMEA’s Kingston offices.

The Jamaica Manufacturers and Exporters Association (JMEA) is claiming that impractical manufacturing standards in the local beverages sector are putting Jamaican manufacturers and distributors at a competitive disadvantage.

With lobbies ramping up an aggressive public-education campaign in support of a tax on sugary drinks to stem the rise in non-communicable diseases, a call has emerged for a review of front-of-pack labels (FOPL) to give customers easily readable information on nutritional value and caloric servings, among other data. The information should be clearly visible without the prospective consumer having to take the package from the shelf.

“You should know what is in it – whether or not it has high sugar, fats, or salts and should reflect the whole diet for health and well-being. It should have meaningful comparisons with all interested parties – Government, industry, consumers, academia, and others,” JMEA Executive Director Imega Breese-McNab acknowledged at a recent follow-up to the Private Sector Organisation of Jamaica’s breakfast forum at a meeting at its downtown Kingston head office.

However, the JMEA executive has raised concerns that the format being pushed on local businesses by the Bureau of Standards Jamaica (BSJ) and the CARICOM Regional Organisation for Standards and Quality (CROSQ) is based on one used by Chile and Brazil, with which Jamaica’s trade in real terms is minuscule.

Instead, local industry players believe that standards used by Jamaica’s major trading partners – the United States of America and the United Kingdom – would provide a more suitable template. They have sought to pitch an alternative to the two standards regulation agencies to no avail, according to Breese-McNab.

The BSJ has informed The Gleaner that it had no control over the standards directive.

“The proposal for a standard came through a directive from the CARICOM Heads of Government meeting held in July 2016. The heads decided on the need to implement nutritional labelling, among other actions such as reducing the marketing of food to children,” Director of the Standards Division Julia Bonner Douett told The Gleaner.

She said that the labelling standard was one of the key tools posited at a meeting of high-level officials from CARICOM institutions and other agencies in Barbados, from February 8-10, 2017, which developed a road map on multisectoral action in countries to prevent childhood obesity through improved food and nutrition security.

“There is no insistence by the Bureau of Standards Jamaica for local businesses to implement mandatory front-of-package labelling. The BSJ’s role is to promote and facilitate the use of standards as a tool to better achieve the Government’s objective to protect the health and safety of the members of our society, she further explained.

However, Breese-McNab lamented that despite a number of meetings with the BSJ since August 2018 in which it has been explained that adoption of the proposed CARICOM standards would serve no useful commercial purpose, the agency has been unyielding in its efforts to impose the standards it deems fit.

“We trade to the north, (so) we had an industry stakeholders meeting with BSJ representatives again on January 17, 2019, and outlined our positions, and not only did we outline our objections, but we put forward recommendations, and we were saying that the front-of-package labelling should be voluntary” Breese-McNab said.

She also urged other food manufacturers and distributors to be on guard.

“I know a lot of people think this thing is just for beverages alone. It is not. Once you are a manufacturer or importer of items with sugar, salts, and fats, it will affect you in some way, shape or form,” Breese-McNab said further.