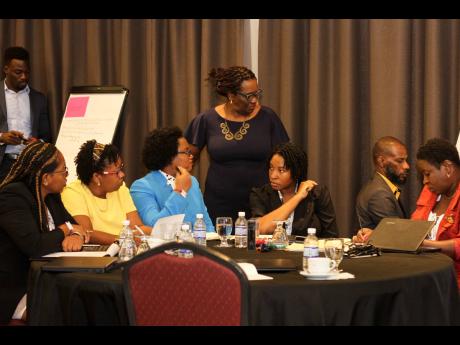 Petre Williams-Raynor
UnaMay Gordon (standing), head of the Climate Change Division, in conversation with participants at the gender and climate change focal point training workshop held last September. It was Gordon’s idea to have a post-COP event with a youth focus. 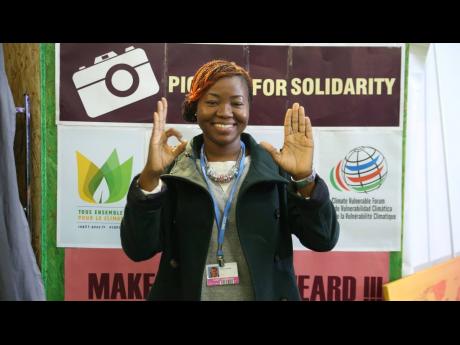 Petre Williams-Raynor
Ayesha Constable shows solidarity for the movement to have 1.5 degrees Celsius as the global warming target reflected in the negotiated text from the now historic climate talks held in Paris in 2015.
1
2

RURAL YOUTHs are to have the chance to get in on the conversation about climate change and Jamaica – from the threats to the opportunities for resilience building.

Prior to now, youths have been left out of the discussions that have followed the annual COP of the UNFCCC where world leaders gather to debate climate-change issues and negotiate response actions. However, on instructions of CCD boss UnaMay Gordon, the entity is seeking to do something about that.

According to one of the organisers, Ayesha Constable, there can be no question of the value of the event.

“It is extremely important in light of recent global activities and also based on current national efforts. Greta Thunberg, the Swedish climate activist, and other young people who have been calling for action from political leaders to stop climate change, attracted significant attention and support globally. Their actions have gained the youth voice greater respect,” she noted.

“There are young people in Jamaica who have been doing their part through activism, research and community mobilisation, who are also very involved. Groups such as Caribbean Youth Environment Network of which there is a Jamaica chapter were champions for the 1.5 degrees global campaign in 2015. With the 1.5 report published and the threats of climate change clearly articulated, youths must be involved in the planning for the new normal,” Constable added.

Further, she noted that the UNFCCC “recognises youths as important stakeholders in the climate discourse, not only as a vulnerable group but as a valuable source of innovation and creativity to help craft solutions”.

“The questions of intergenerational equity and climate justice demand that older generations create the enabling framework – resources and legislative support – to ensure present and future generations have access to critical resources to sustain them in this era of climate change,” she said.

Youths are invited to come out in their numbers to the Wexford Hotel in the western resort city where the event is being staged.

“We have invited students from the secondary and tertiary level mainly because the discussions and activities are primarily designed with that age group in mind. We ideally would like them to have a basic knowledge of some of the key issues and concepts to fully engage the discussions,” Constable said.

“Also, we realise that with the inclusion of climate change in the curriculum it would be also of great academic value to those groups. We have confirmed participants from high schools, teachers’ colleges and universities in western Jamaica,” she added.

Among the content to be covered at the meeting are the science and politics of climate change.

“It is important that they understand the scales at which climate change is being addressed and the mechanisms to treat with it, globally, regionally and nationally. They will hear from experts from the CCD and Climate Studies Group Mona to contextualise the discussions as it relates to youth in the COP and the science of climate change,” Constable noted.

“There will also be a panel comprised of youth experts on issues related to innovation and entrepreneurship, youth-led actions and communicating climate change – all within the context of climate change,” she added.

Climate change is considered the most pressing threat to development, and to which small island developing states, such as Jamaica, are considered to be among the most vulnerable. Fuelled by the human consumption of fossil fuels, climate change presents threats, including global warming, more extreme weather events, including hurricanes and droughts, as well as threats to water and food security.

“This offers the participants a chance to meet and speak directly with representatives of organisations involved in climate and development work,” Constable said.

The information gathered from the youths should help to inform their engagement with other key stakeholders, including policymakers, on climate change going forward.