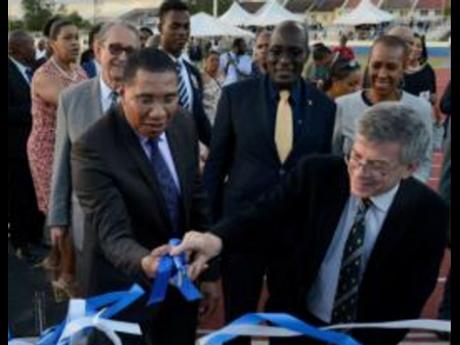 The Education Ministry says it still has the $20 million that Prime Minister Andrew Holness had announced in February was contributed to Jamaica College for its track stadium.

Holness, in making the announcement at the official opening of the stadium a month ago, said the Sports Development Foundation had donated an additional $10 million.

But in a statement this week, the Jamaica College board said it did not receive the $20 million.

The school, only acknowledged receiving the $10 through the sports foundation.

The $20 million was committed by Education Minister Ruel Reid, who last week resigned amid corruption allegations.

Reid is also the principal of Jamaica College but had been on leave of absence to fulfill his appointment as a Government minister.

In a statement Wednesday evening, the Education Ministry said the $20 million had not been transferred to the school and remains with the Government of Jamaica.

"On the instructions of the Prime Minister, this planned contribution was halted as a review of the Ministry’s systems and programmes continues," a spokesman further said in the ministry's statement.

The spokesman said too that as part of the review process, the Education Ministry is assessing all requested, proposed or planned expenditure of similar nature.

The Jamaica College Stadium was constructed solely through a donation by the Ashenheim family.

The school says it welcomes further donations for the equipping and maintenance of the stadium.