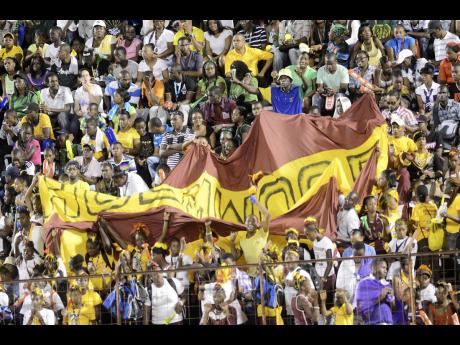 Ricardo Makyn
Holmwood fans show their support during the ISSA/GraceKennedy Boys and Girls’ Athletics Championships at the National Stadium.

Two schools have thoroughly dominated the girls’ team competition since the merger of Boys’ Championships with Girls Championships in 1999 – Holmwood Technical and Edwin Allen High. In fact, since Holmwood’s first victory in 2003, these are the only two schools to have gone home from Champs as winners.

St Jago High School won the first girls’ title of the new era. Then, in 2001 and 2002, Vere Technical won the last of its 22 titles. Then came Holmwood.

The journey began 10 years earlier as two young coaches sat at Boys’ Champs waiting for the 5000 metres. As related by the 2003 Champs Preview, Maurice Wilson, then coaching at his alma mater, Ferncourt High, asked Edwin Allen coach Michael Dyke: “Why do we have to wait for so long to score some points at Champs?”

While Dyke has stayed at his old school, Wilson moved via Clarendon College to Holmwood, where he built a dynasty. After that win in 2003, Holmwood ruled until Dyke’s Edwin Allen stopped the streak at nine titles in 2012.

Holmwood regained the title in 2013, Wilson’s last season there, and Edwin Allen has ruled since then.

Their dominance is tangible. In 2009, Holmwood produced the highest winning total – 400.5 points – under the current scoring system. Edwin Allen has the most records, with 12 of the 49 Girls’ Championships standards.

By comparison, Vere still has nine Champs records, and Holmwood and St Jago have five each, with new powerhouse Hydel High owning four.

Holmwood holds all three of the 400-metre records through Sonita Sutherland, Chris-Ann Gordon and Anniesha McLaughlin. Remarkably, those records stand at 51.13, 51.62 and 52.52 seconds, respectively.

McLaughlin held the Class III 200m record as well, at 23.11 seconds, until 2017 when Kevona Davis of Edwin Allen clipped it at 23.07 seconds. Working as a TV analyst, Wilson was the first to congratulate Davis’ coach, Michael Dyke.

In 1993, the two friends were waiting to score points at the end of Boys’ Champs in the 5000 metres. Since then, Dyke has transmuted Edwin Allen into a sprint force. His girls hold the Class II 100 and 200 records, the Class III 200 record and the 4x100m records in classes I, II and III.

Asked this season about the speed Edwin Allen has displayed, Dyke responded in his usual understated style.

Despite that, Edwin Allen holds the records in the Class I 800m and the steeplechase.

Curiously, the school’s signature event is probably the 400-metre hurdles. Edwin Allen has won the event eight times from 2004 onward. In 2006, 2009 and 2010, Dyke’s team produced the gold and silver medallists. Two of those were Tracey sister act performances by Nikita and Ristananna.

A year after reaching her first Olympic final, ‘Rista’ won a bronze medal at the 2017 World Championships. As it was in the 2016 Olympics, she had familiar faces with her. Danniel Thomas-Dodd, a product of the school’s throwing programme, was fourth in the shot put.

Thomas-Dodd is now the Commonwealth Games champion and silver medallist at the World Indoor Championships.

The 2014 Champs Class I 100-metre gold medal winner, Christania Williams, broke 11 seconds in 2016 and reached the Olympic final. After World and Olympic relay medals, she and another Edwin Allen speedster, Gayon Evans, went two-three at the Commonwealth Games in the 100m.

At those same Games, Holmwood Olympian Anatascia LeRoy was second in the 400m. In that very event, Rosemarie Whyte reached the 2008 and 2012 Olympic finals and helped medal-winning Olympic and World Championship quartets in that same period.

McLaughlin, a World 200m finalist in 2009, continued that tradition in 2016 when she helped Jamaica to second place.

A new wave of Holmwood and Edwin Allen athletes will no doubt make Jamaica proud in the years to come. Time will tell if Dyke’s Edwin Allen girls will eventually surpass the number of titles Holmwood has won.