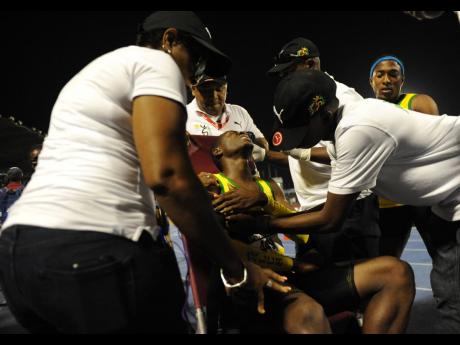 Gladstone Taylor
Members of the medical team attend to an injured athlete at the 2017 staging of the ISSA/GraceKennedy Boys and Girls Athletics Championships.

The Medical team for the ISSA/GraceKennedy Boys and Girls’ Athletics Championships is prepared for any medical eventualities during the annual five-day event.

According to Dr Lambert Innis, who is in charge of the team, his unit will be using the tested method that they have put in operation over the years, with approximately 50 medical people at the venue on Tuesday – when the schedule will be fairly light – and peaking at approximately 90 when the stadium is expected to filled to capacity on Saturday.

Innis said that the team will be briefed early Tuesday morning before the start of the championships, in an effort to ensure that all are aware of the guidelines and procedures, especially since the medical team is comprised of volunteers.

Innis said: “The team is made up of volunteers and we are ready. We are going to have a briefing before Champs starts, just to ensure that we can do the steps when necessary, as it is medicine and if anything happens to any of the athletes and spectators, or anybody in the facility, we are in a position to look after them the best we can.

“We have guidelines, we have a protocol, we have a plan that we have been using for years. We’re doing things just as we did last year and over the years.

“We send out the appeal for medical personnel to volunteer, because it is a volunteerism type of event, and we have the full spectrum as we are going to have the doctors and nurses stations; we are going to have EMT (emergency medical technical) strategically located right across the stadium, for example, finish line, warm-up field, spectator medical. We have a number of ambulances strategically placed in case we have to transfer patients,” Innis said.

In recent years, Jamaica has had a number of athletes having medical complications while participating in athletics, with the most recent being middle-distance runner Kemoy Campbell, collapsing in the Millrose Games in New York, United States of America (USA), in February. It is still unclear what caused Campbell’s illness.

In 2014, St Jago schoolboy Cavahn McKenzie died after competing in the 6K for Jamaica in the 6K race at the North American, Central American and Caribbean Athletics Association Cross Country Championships. An autopsy conducted on McKenzie indicated that he died of a heart attack.

In 2016, St George’s College footballer Dominic James collapsed during a Manning Cup match against Excelsior High and died at the University Hospital of the West Indies, with tests also showing that he died of heart failure.

Innis is, however, confident that the medical team will be able to deal with situations like these during the five-day championship.

He said that, apart from personnel, the medical team will also have equipment and medication to handle whatever situation arises.

Innis said: “Based on what happens at the time, because Kemoy’s situation is complex, we will be able to handle it. This is something that we have been doing every year. It is a well-oiled machine in terms of operations we have going.

“We have trained, skilled, professionals covering the track; we will have the necessary equipment; we will have the ambulances ready to transfer the patient after adequate resuscitation and they are stable and we can safely transfer them to a healthcare facility to offer a higher level of care.

“We are prepared to deal with emergencies that come up the best we can, as had happened in the past,” Innis said.

A number of organisations, including NGOs and corporate companies, have been trying to assist the island’s sports community with equipment to be better able to treat medical emergencies when they happen.

Last year, Team Jamaica Bickle, based in the USA, gave a number of the island’s high schools automated external defibrillators (AED) and first aid kits in an effort to upgrade the medical equipment at the institutions. Team Jamaica Bickle also provided training to use the equipment.

The organisation started the Defibrillator to School Programme in 2014 after McKenzie’s death.

Earlier this month, spurred by Campbell’s situation, GraceKennedy, the major sponsors of Boys and Girls’ Athletics Championships, donated five defibrillators to high schools, with each costing approximately US$2,500 or J$315,000.