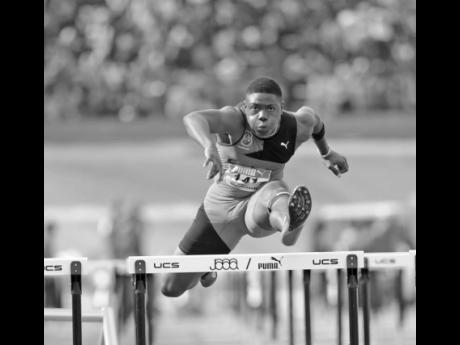 Throughout the 109 years of Boys’ Champs, very rarely has an institution put together a team that started their journey from Class III and travelled together for almost the entire journey, until their departure from what some consider the greatest high-school track and field event in the world.

There have been dream pairs, and even the rarer examples of a superb athletic trio, that electrifies the venue when they take to the track and bring glory to their institution, by being above their peers and capturing huge points in individual events to help win the Mortimer Geddes Trophy.

Calabar High, however, have accomplished the rarest of feats at the ISSA/GraceKennedy Boys’ and Girls’ Athletic Championships for the past five years. They have managed to field the same quintet of track and field athletes who have enabled them to win Boys’ Champs each of those years and seven consecutive times.

Led by the confident Christopher Taylor, Calabar assembled a crack team of sprinters that gobbles up the opponents during Champs, bringing in much-needed points to secure victory. Joining Taylor in the quintet are Tyreke Wilson, Dejour Russell, Michael Stephens and Anthony Carpenter.

So far, in their Champs travels from Class III, the most points they have garnered at one Championships for Calabar have been 68, done in 2014, when the Red Hills Road-based institution amassed 305 points for a huge victory, with their nearest opponent being arch-rivals Kingston College, who got 208.

Taylor collected a maximum 16 points from his two races, as he won the 400, while finishing second to teammate Wilson in the 200 metres event. In the process, he broke the 400 metres record in the preliminary round, by establishing a new standard of 48.72 seconds. Wilson’s victory served as Taylor’s last defeat (of two) at Champs.

Wilson, however, was the star on that occasion as the 21.72 he ran in the 200 final established a new record. He also won the 100 metres ahead of another from the group, Russell, to collect the maximum 18 points from the two individual events.

Russell had some redemption in the 100 metres hurdles, which he won to earn 16 points. Stephens, in his only race that year, finished third to give Calabar six points, with Carpenter adding another 12 points as being a tad older, he ran in Class Two and finished third in both the 400 and 200 metres.

In 2017, the quintet handed Calabar 56 of their 317 points, with all now being Class I athletes. Taylor led the pack with maximum 18 points, from victories in the 400 and 200 metres events.

Wilson, who finished third behind Taylor in the 200 metres, provided Calabar with 13 points, as he also placed second in the 100 metres behind Stephens, whose nine points from the win was his only individual contribution. Carpenter added another seven points for placing second behind Taylor in the 400 metres.

Russell’s effort produced nine points, as he won the 110 metres hurdles in a record time of 13.21.

In 2015, with the athletes in Class Two, Taylor again gave Calabar the maximum 16 points in two races, as he won the 400 and 200 metres, in the process beating Carpenter and Wilson into second position, respectively.

Russell also had 18 points ,as he won the 100 metres and the 110 metres hurdles. Wilson also finished second in the 100 metres, and, adding the points he gained from the 200 metres, gave Calabar 14.

In 2016, in their second year of Class II, Taylor was once again up to his usual self, winning both the 400 and 200 metres to give Calabar 18 points. He was in top form in the preliminary rounds, as he dismantled the 400 metres record to establish 46.33 seconds.

Russell, however, collected the most points for Calabar as he won the 110 metres hurdles in a record 13.45 seconds, finished second to Taylor in the 200 metres and Stephens in the 100 metres for a points tally of 23. Stephens gave Calabar nine points for the 100 metres victory, while Carpenter was out of action due to injury.

Last year, as second-year Class I athletes, the five contributed 41 of Calabar’s 368.5 points, with Taylor this time only doing the 200 metres, to earn nine points. Carpenter contributed the most, 14, as he also finished second in the 400 metres.

It was in their first year at Champs, in Class 3, that they pooled the least number of points individually, as they only gave Calabar 26 of the winning 299 points in 2013. Nathaniel Bann of Kingston College inflicted Taylor’s only other loss at Champs. Also, it was Taylor’s only loss in the 400 metres race in his Champs career.

Carpenter again collected the most points for Calabar, 12 for finishing third in both the 400 metres and 200 metres, while Wilson finished second in the 100 metres.

With a fierce battle expected for the title this year between Calabar and KC, the remaining three from the group will be hard-pressed to keep Calabar winning, as Carpenter and Wilson have departed the institution, leaving Stephens, Taylor and Russell to keep the green and black colours flying proudly.