The Abeng Tour A historic event 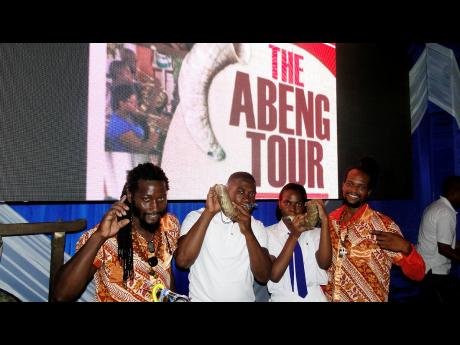 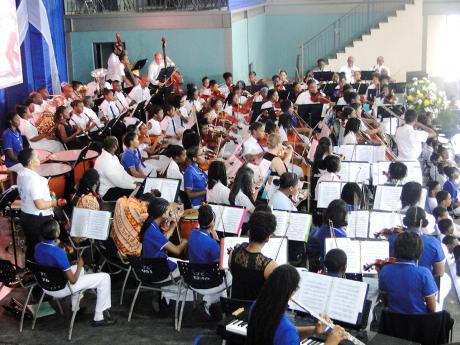 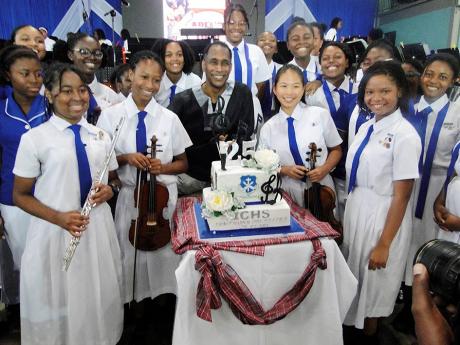 Paul Williams
Conductor Steven Woodham and the Immaculate Conception High School (ICHS) Symphony Orchestra 25th anniversary cake are surrounded by some members of the orchestra and the ICHS Glee Club. 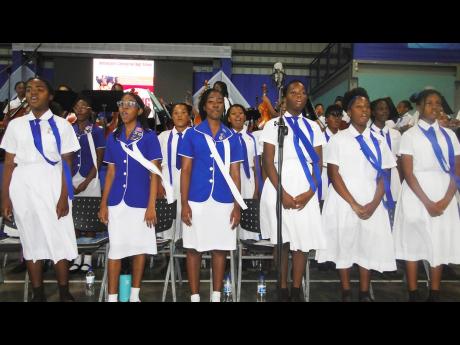 On Sunday, March 17, at the Karl Hendrickson Auditorium at Jamaica College in St Andrew, the expectations were high. And when the final notes were struck, patrons at the 1 o’clock show of the Immaculate Conception High School (ICHS) Symphony Orchestra’s presentation of the Kongkongraba (Abeng) Symphony were glad they had gone.

Billed as the Abeng Tour, it was a historic evening on many levels. It was the 25th anniversary of the ICHS Symphonic Orchestra and the first time all four movements of the Kongkongraba Symphony were played at one sitting. It was also the world premiere.

The abeng is a wind instrument fashioned from a bull’s horn. Having its own vocabulary and language, it was a significant communication medium for the Maroons in Jamaica. They used it to send long-distance messages and to invoke the spirits of their ancestors. Hence, it is a major part of the Maroon story and is still being used in contemporary rituals. But how did it become the headline for a symphony?

“For a number of years, I have been looking for an original work for the ICHS Symphony Orchestra, a uniquely Jamaican work which would capture the essence of our diverse cultural heritage and also highlight a number of key elements of this very talented student orchestra,” conductor Steven Woodham told Living.

In his programme notes on Sunday, composer Dr Andrew Marshall wrote, “His [Woodham’s] idea resonated with my own in terms of exploring novel themes and musical ideas, and so soon enough, the idea of incorporating elements of the Jamaican Maroon traditions was one that took root.”

In 2015, Woodham’s dream became a reality when Jamaican composer Marshall presented ‘Abeng’ to the orchestra.

“It was a wonderful work … which musically narrates the strength, courage and history of the Maroons,” Woodham said.

Woodham grabbed the Kongkongraba from Marshall and ran with it, embarking upon the Abeng Tour, which has made stops in Morant Bay, St Thomas; Buff Bay, Portland; and Montego Bay, St James.

The Jamaica College leg of the tour was simply magical and powerful. It could not be otherwise when Jamaica’s doyen of classical music, Steven Woodham; the ICHS Symphony Orchestra; the ICHS Glee Club; the ICHS Chamber Ensemble; specially invited members of the Jamaica Defence Force Band; and the Kingston College Chapel Choir (KCCC) were juxtaposed on the same stage.

They were nothing short of riveting when together they ended the first half of the show with the chilling but popular O Fortuna from ‘Carmina Burana’ by Carl Orff, arranged by Stephen Bulla. Before that, each group, led by their respective director, Woodham (ICHS), Allison Wallace (ICHS Glee Club) and Audley Davidson (KCCC) performed well-known and timeless pieces in various styles and tones.

Despite the impact of O Fortuna, the piece that brought the magic more than any other was In a Gentle Rain by Robert W. Smith. Coming after Soundscape, an improvisation by the ICHS Symphony Orchestra, the auditorium was transformed into a tropical rainforest. The only thing that was missing was the lightning, MC Donna Haynes noted.

The low lights, the sounds of snapping fingers and stomping feet from the full company, instrumental notes, and the visuals from the screen above the musicians, created an aura that was beyond words. And to add to the total effect of it all, there was a really gentle Sunday-evening rain upon the roof.

The magic and the power continued after the intermission when it was all about the Kongkongraba, dedicated to the ICHS Symphony Orchestra and Woodham. The first movement belonged to the ‘Abeng’ and a full cadre of percussion instruments of the Maroon culture in addition to the traditional classical ensemble. Captain Padam Delano Douglas and Moustaffa Reds, of the Charles Town Maroons in Portland, played the Maroon drums.

“In a style reminiscent of the classical tradition fused with local themes within”, Backra Waltz took over the floor of the great house in the second movement. The emotions of Whai, Whai, a wailing song based on an actual Maroon melody, were conveyed by the chorus, orchestra and a solo violin.

In Onslaught, the final movement, “bugle calls, anthem quotations, and British brass bands blare within the din of cutting drums, irons, and spitting Maroon battle cries as the two forces prepare to collide, with the latter ultimately prevailing”.

And so it was on a triumphant note that the Kongkongraba Symphony ended. The abengs and other instruments were silenced, to rest for another leg of the Abeng Tour.