Kathryn Williams | Does the IDT conform to the Constitution of Jamaica? 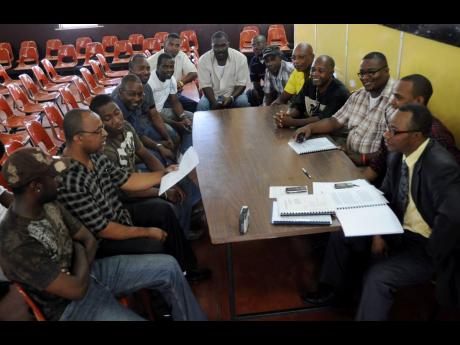 File
2009: Trade unionist Granville Valentine (left), of the National Workers Union, tells workers from a local company who had been laid off from their jobs that the Industrial Disputes Tribunal had ruled in their favour to have them reinstated.

Section 11A of the Labour Relations and Industrial Disputes Act (LRIDA) was amended in March 2010. This amendment empowered the minister of labour and social security to refer disputes to the Industrial Disputes Tribunal (IDT) on his own initiative without having to show that any industrial action has been, or is likely to be, taken in contemplation or furtherance of the dispute. In addition, he may refer the dispute to the tribunal even where the aggrieved worker is not a member of a trade union having bargaining rights.

This amendment widened the scope of the types of disputes that the IDT could determine, since it granted IDT access to non-unionised workers who have disputes with their employers. In other words, this amendment made it possible for disputes which would ordinarily give rise to a wrongful dismissal claim in the Supreme Court to now be heard and determined by the IDT.

Unsurprisingly, there have been concerns that this 2010 amendment violates the Constitution of Jamaica as it confers on the IDT a jurisdiction similar to the Supreme Court’s original jurisdiction to hear civil claims, without giving the members of the IDT the constitutional protections that are afforded to judges of the Supreme Court.

Historical origins to the 2010 Amendment

Prior to 1975, when the LRIDA was enacted, a full voluntary system of collective bargaining and the resolution of industrial disputes existed in Jamaica. The LRIDA replaced the Jamaica Trade Disputes (Arbitration and Enquiry) Law 1959 and changed the ad hoc industrial arbitration system. The LRIDA instituted particular circumstances whereby the exercise of industrial action would be condoned. It also empowered the minister to intervene with a view to either averting the onset of industrial action or to cutting it short while in progress.

Perhaps the most far-reaching power afforded to the minister in the effort to minimise industrial action is that delineated by Section 11A of LRIDA, where he may act on his own initiative to refer a matter to the IDT for settlement. Prior to LRIDA’s 2010 amendment, the minister had to ensure that the dispute related to a collective group of workers, and had the capability of disrupting industrial peace before he could exercise this wide power.

Interestingly, the amendment has removed these prerequisites and the tribunal now has the discretionary power to award compensation and/or reinstatement to an employee who it has been determined has been unjustifiably dismissed, even when there is no threat to industrial peace.

The IDT’s compensatory powers are not limited by statute, and it is not bound by its previous decisions. This is unlike the Supreme Court where the amount of compensation which a judge can award a dismissed worker in a wrongful dismissal claim is limited by precedent and the employment contract of the dismissed worker.

Therefore, prior to the 2010 amendment, the IDT could be considered a specialist tribunal that was concerned with the settlement of industrial disputes through conciliatory or arbitral methods, and not set up merely to satisfy the narrow personal interests of dismissed workers (see: Rattray P in Village Resorts Ltd v Industrial Disputes Tribunal (1998) 35 JLR 292.

Notably, the remedy for a party aggrieved by a decision of the IDT (such as an employer against whom an adverse award was made) is judicial review, and they have no right of appeal. Judicial review, which is the extent of the Supreme Court’s supervisory jurisdiction over the IDT, is a far more restrictive process than an appeal. This review is limited, in that it can only pronounce on points of law, with questions of fact being unimpeachable.

The 2010 amendment to Section 11A in effect opened the door for the IDT to adjudicate on matters which would ordinarily be wrongful dismissal claims in the Supreme Court. The difficulty with this is that the members of the IDT do not enjoy the same constitutional status as the judges of the Supreme Court. In fact, members of the IDT, who need not be legally trained, are essentially political appointments, having been appointed by the minister of labour and social security, and they serve at the pleasure of the minister.

Additionally, the LRIDA does not give a fixed time period within which members of the tribunal are to hold office, and the minister may at any time revoke the appointment of any member of the tribunal.

By contrast, appointments to the Supreme Court are governed by Section 98 of the Constitution which provides that the chief justice and puisne judges are to be appointed by the governor general, and Section 100 which affords judges security of tenure. That is to say, they hold office until retirement, safeguarding their independence. Indeed, this independence is further assured by the appointment of the chief justice by the governor general on the recommendation of the prime minister, after consultation with the leader of the Opposition.

The provisions relating to the appointment and terms of service of judicial officers are designed to insulate them against improper political pressure. There are also other provisions and rules aimed at ensuring that judicial officers are free of bias and act impartially in all matters brought before them. For instance, judges of the superior courts as well as resident magistrates are disqualified from parliamentary membership.

The doctrine of separation of powers is a principle which embodies a system of checks and balances aimed at preventing an over-concentration of power in any one arm of government. Under the Constitution, one branch of government may not trespass upon the province of any other. The Constitution gives to each arm of government such powers as are deemed to be necessary in order to discharge their functions. Specifically, the primary duty of the judiciary is the maintenance of fair and effective administration of justice.

In the Caribbean, the principle of the separation of powers has received its principal application by securing the independence of the courts from the control of the executive. This is unsurprising as it has been said that the “absolute independence of the judiciary is the bulwark of the Constitution against encroachment, whether by the legislature or the executive. To vest in the same body executive and judicial power, is to remove a vital constitutional safeguard.”

This principle was upheld in Hinds and others v The Queen [1977] AC 195. In that case, the Privy Council held that the principle of separation of powers was implicit in the Constitution, and that the Jamaican Parliament had no power to transfer from the judiciary to a review board, a discretion to determine the severity of punishment for persons found guilty of gun crimes under certain provisions of the Gun Court Act. Consequently, those provisions of the act were declared contrary to the Constitution and, therefore, void.

The IDT’s functions since the 2010 amendment can be considered similar to that of the Supreme Court and it adjudicates on matters akin to claims for wrongful dismissal which are rightly brought in the Supreme Court. The IDT, an inferior tribunal, makes higher awards, and grants additional relief, such as reinstatement, over and above what the Supreme Court can award or grant on essentially the same type of claim.

In addition, since the LRIDA does not confer a right of appeal from decisions of the IDT. Hence, the only remedy for those aggrieved by its decisions is to apply for judicial review. This remedy is restricted to determining whether the IDT erred in making its decision and does not extend to a review of the facts surrounding the decision itself. Bearing all these considerations in mind, it is clear that by virtue of the amendment to Section 11A of the LRIDA, and the wide, unfettered power of the IDT, the jurisdiction of the Supreme Court has been derogated to a substantial degree.

It, therefore, follows that since the IDT is exercising a jurisdiction analogous to the Supreme Court’s original jurisdiction to hear civil claims, then its members ought to be appointed in accordance with the constitutional provisions for the appointment of judges to the Supreme Court. The fact that the members of the IDT are currently appointed by the minister of labour and social security, and serve at his pleasure, is wholly inconsistent with the doctrine of separation of powers as there is no safeguard against these members being subjected to political pressure. There is uncertainty as to the tenure of members of the IDT, which means that they may feel compelled to decide cases in a certain way or they may be removed by the minister.

Further, the International Labour Organization, in its 2016 Concluding Comments on Jamaica’s compliance with the Freedom of Association Convention, expressed concern at the extensive power of the minister to refer an industrial dispute to arbitration, and noted the Government’s indication that it was considering the committee’s request to amend certain sections of the LRIDA, including Section 11A.

For these reasons, it is the writer’s opinion that Section 11A is unconstitutional as it violates the doctrine of separation of powers. In order to remedy this, either this provision is removed from the LRIDA, and the position of the IDT reverted to its pre-2010 position, or the amendment remain in the LRIDA, with members of the IDT being appointed in the same manner as Supreme Court judges.

Kathryn A. Williams is an attorney-at-law and associate at Livingston, Alexander & Levy.