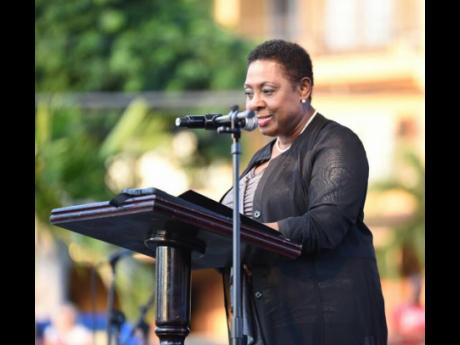 Culture and Entertainment Minister Olivia ‘Babsy’ Grange addressing the audience at the unveiling of Jimmy Cliff Boulevard at a ceremony held at the Old Hospital Park in Montego Bay.

“I would like to see a statue of Jimmy Cliff in the heart of Montego Bay,” Grange told reporters while attending a ceremony to unveil the Jimmy Cliff Boulevard sign, in honour of the reggae artiste, at the Old Hospital Park in Montego Bay on Thursday.

“We must have monuments so that future generations can recognise and look at those monuments as inspiration, and it would be fitting and most appropriate to have a statue of Jimmy Cliff here in Montego Bay.”

The newly named boulevard, formerly known as Gloucester Avenue and popularly called the ‘Hip Strip’, was renamed in recognition of Chambers’ role in exposing Jamaica’s culture on the global stage.

“It is my pleasure to be a part of this renaming ceremony from Gloucester Avenue to Jimmy Cliff Boulevard, reflecting our own history and our own pride,” Grange said while addressing the function.

“Today, we pay homage to a musical giant in declaring the new Jimmy Cliff Boulevard, in recognition and celebration of a musical genius whose creative imagination and forceful character have brought fame, not only to himself, but to Montego Bay, St James, western Jamaica and to Jamaica, land we love.”

Grange also indicated that more monuments should be similarly erected to honour other Jamaican icons, as had been done with the unveiling of a statue of the late Louise ‘Miss Lou’ Bennett-Coverley in Gordon Town, St Andrew, last September.

“We have commissioned and mounted statues of our athletes, we have started in treating with our culture, a statue of Louise Bennett-Coverley, and so there will be many more statues to come,” said Grange.