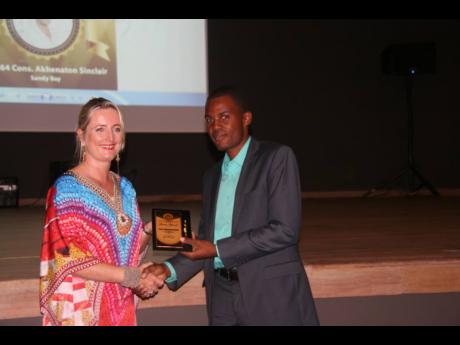 Chairman of the Hanover Charities foundation, Kathrin Casserly, presents an award plaque to Constable A. Sinclair of the Sandy Bay Police Station for outstanding service to the community. Constable Sinclair is also the Hanover LASCO Top Cop for 2018.

The work and worth of approximately 63 rank and file police personnel from the Jamaica Constabulary Force (JCF) Hanover Division were highlighted during an awards ceremony, held on Saturday at the Royalton Negril Resort and Spa.

Other senior police officers from Area One, family and community members, along with their co-workers, were on hand to cheer them on as they were identified and called to collect their respective plaques and prizes for their hard work and commitment to duty over the last year.

Superintendent of Police in charge of the Hanover Division, Sharon Beeput, in her comments at the ceremony, thanked the awardees for their unwavering support, while highlighting some of the achievements of the police in the division over the period. She acknowledged the support of other agencies, organisations and individuals towards the aim of making the parish of Hanover a safer place.

“Any success we have enjoyed has come from the hard work of our field operatives, and the reliable partnership from our military police. Concurrently, the court staff, along with our parish judges in particular, have come to our aid on numerous occasions,” Beeput said.

“This is team work, and we salute all our stakeholders who have contributed in one way or the other to the success of our mission,” she said.

She emphasised, however, that despite the achievements in the division, it is her opinion that JCF personnel are not at a point where they can relax and rest on their laurels. She added that the partnership has to continue, along with the hard work and commitment towards making Hanover a safe and suitable place to live, raise families and do business.

Custos of Hanover Dr David Stair, who was present at the event, told The Gleaner in an interview that he is very impressed with the effort to recognise the men and women of the JCF who toil daily to reassure and protect the residents in the parish.

“I am hoping that this will become an annual event, as I have never seen so many prominent Hanoverians turning out to support our members of the JCF, and I really think it is commendable, honouring all those who serve, even the civilians who have served the force for many years,” he stated.

Stair expressed special congratulations to Superintendent Sharon Beeput for putting together the event, adding that it is his view that the event will work as a motivator and stimulant for the continued good performance of the JCF personnel in the parish.

Also in attendance at the event were Michael Bailey, senior superintendent of police for Area One; intelligence coordinator for Area One, Major Garth Anderson, Jamaica Defence Force; Parish Judge Pamela Blackhall; and several councillors from the Hanover Municipal Corporation.