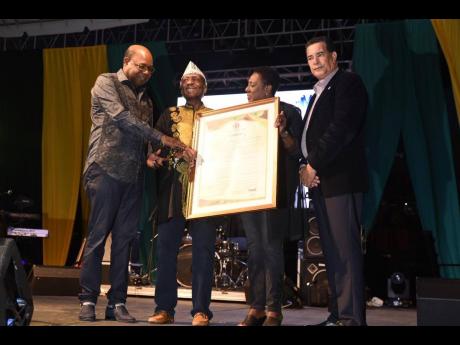 James ‘Jimmy Cliff’ Chambers (second left) being presented with a citation in his honour by Tourism Minister Ed Bartlett (left); Montego Bay’s mayor, Homer Davis, and Minister of Culture Olivia ‘Babsy’ Grange at the unveiling of Jimmy Cliff Boulevard, held at the Old Hospital Park in Montego Bay to honour the reggae icon.

Montego Bay Mayor Homer Davis says that millions of international visitors will now be able to recognise the name Jimmy Cliff with the renaming of Gloucester Avenue in Montego Bay to the Jimmy Cliff Boulevard, in honour of reggae icon Dr James ‘Jimmy Cliff’ Chambers.

“Visitors to the island will now be able to identify with the name Jimmy Cliff, a name which is etched among some of the greatest musicians of all time in the Rock and Roll Hall of Fame,” Davis said, while addressing the unveiling of the Jimmy Cliff Boulevard sign at the Old Hospital Park in Montego Bay on Thursday.

“There is no question regarding Jimmy Cliff’s international appeal, and with that in mind, I am of the opinion that this renaming will bring new energies and new life to this Hip Strip (the popular name for the former Gloucester Avenue) which currently is home to a number of outstanding local and international companies and brands,” the mayor added.

Chambers skyrocketed to popularity in the musical industry during the 1960s and 1970s with hits such as Wonderful World, Beautiful People, Waterfall, and Vietnam, and he also became popular as an actor in the 1972 film The Harder They Come. He is also famous for other music singles such as Hotshot, Many Rivers to Cross, and his rendition of Johnny Nash’s I Can See Clearly Now.

During Thursday’s ceremony, Chambers thanked the leadership of the St James Municipal Corporation, the Ministry of Tourism and the Ministry of Culture and Entertainment for honouring him with the newly renamed road.

“It felt really good to be honoured in the mother country (Africa), but here in the parish of St James that I was born, to be honoured, I thank you very much and blessed love,” Chamber said.