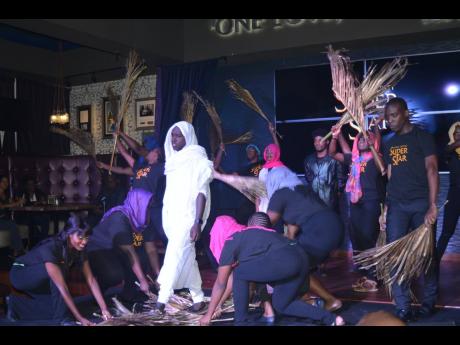 Actors from First Dance Studios perform a piece from the Broadway musical ‘Jesus Christ Superstar’ during the musical’s media launch at the Hard Rock Café in Montego Bay on Thursday evening.

Tourism Minister Edmund Bartlett has announced that his ministry will soon receive a design draft for the construction of a performing arts centre to be built in Montego Bay, to revive the western city’s theatre culture and enhance the local tourism product.

Bartlett made the announcement during the media launch for the local staging of the Jesus Christ Superstar Broadway musical, held at the Hard Rock Café in Montego Bay on Thursday evening. The musical, which premièred on Broadway in 1971, will be shown at the Iberostar Hotel on April 13 and 14.

“The performing arts, and in particular theatrical productions, are ready for a shot in the arm. It is through that vision that we will, by the end of this month (March), receive the first preliminary designs for a government campus which will include the first and most important theatrical performance centre in western Jamaica,” said Bartlett.

“I’m excited about bringing together a facility with accommodations for side developments as we prepare for production and training in the theatrical arts,” Bartlett added. “This is so that we can not only be good on the stage, but also be great producers and provide the lights, songs, props and all that’s required to create an excellent world-class production of any kind of theatrical offering here in Montego Bay.”

The development of the new performing arts centre, which will have a 1,000-seating capacity, would be Montego Bay’s greatest theatre offering since 1975’s Montego Bay Little Theatre Movement, which later evolved into the Fairfield Theatre.

Bartlett said that aside from improving local tourism, the new performance theatre will legitimise Montego Bay’s city status and provide an avenue for young performers to show their talent.

“I want it to happen because it enhances the tourism product also. It’s not only an important part of building civility in our city, because there’s no city that can operate fully and be truly regarded as a city without a performing arts theatre, but it will also offer an opportunity for our young artists and performers to have a venue and an arena for expression and showcasing of their artistic talents,” said Bartlett.