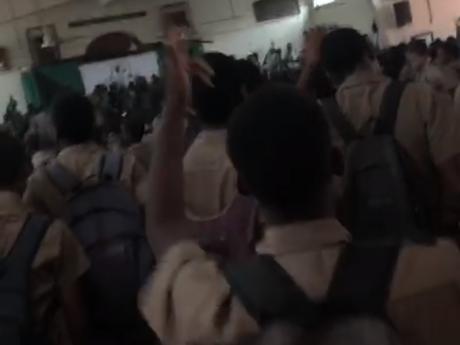 A screenshot from the viral video in which students at Calabar High School were making derogatory slurs against rival students at Kingston College.

The Education Ministry is reporting that the administration at Calabar High School has agreed to issue a public apology to students and staff of Kingston College arising from a viral video showing its students chanting derogatory slurs directed at KC pupils during an assembly yesterday morning at the Red Hills Road-based institution.

In a statement, the ministry said a during the meeting today, the school’s administration indicated that an apology has been issued.

The ministry further said that a joint devotion is to be held with Kingston College tomorrow during which the apology will be read.

Additionally, the ministry said the Board at Calabar has launched an investigation into the matter and has committed to providing a report to the Minister without Portfolio with responsibility for Education, Karl Samuda, by Friday.

Samuda and Minister of State in the Education Ministry Alando Terrelonge today met with members of the Board of Calabar and the school’s senior leadership.

According to the ministry, Samuda, in addressing the issue, condemned the behaviour in the video calling it disturbing and distasteful and not in keeping with the positive actions and values that the education system instills in students.

He urged students to demonstrate respect and good sportsmanship notwithstanding any disappointments.

The education ministry is assuring that steps will be taken to ensure that the matter is appropriately addressed.