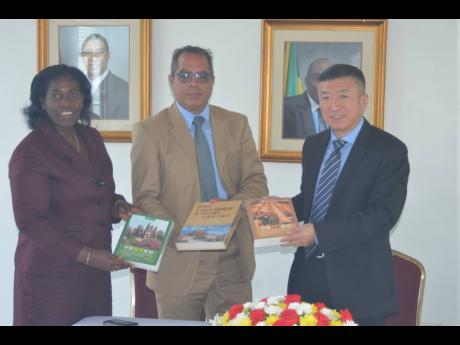 Photo by Christopher Thomas
From left: Dr Marie Nelson, principal of Montego Bay Community College (MBCC); Stephen Dear, MBCC’s board chairman; and Tian Qi, China’s ambassador to Jamaica, display several textbooks about China during the ambassador’s visit to the school yesterday. MBCC is to begin offering Mandarin, the official language of China, as a course in September.

Montego Bay Community College (MBCC) in St James will be offering the Chinese language Mandarin, as a course when the next academic year begins.

“The course will be offered, starting in September of 2019. We signed a memorandum of understanding in December, and we are currently working on a work permit for the instructor so he can start teaching in September,” Nelson told The Gleaner.

The principal noted that Mandarin will allow students, particularly those entering the tourism sector, to have better communication with Chinese nationals.

“Because of the population increase in Chinese nationals in this area, it is critical for our students leaving the institution to be equipped, especially in the hospitality area, to communicate with these nationals, and we’re prepared to share the experience with other institutions, as well,” said Nelson.

In starting the programme in the Second City, MBCC will follow in the footsteps of The University of the West Indies (UWI), Mona Western Jamaica Campus, which launched a Mandarin programme in association with the Confucius Institute at The UWI, Mona campus, in 2014. That initiative was done to bridge the language barrier in order to capitalise on the deepening China-Jamaica relations, which has resulted in an expansion of prospects for trade, commerce, and tourism.

During his visit yesterday, the Chinese ambassador told MBCC officials that the school’s willingness to teach Mandarin will help to cement the current relationship between China and Jamaica.

“I think the Chinese course in this college is only the beginning. You are a pioneer and contributor to our cooperation, and in the future, I hope we can attract more cultural elements to the course here,” said Tian.

“We always say that the journey of a thousand miles begins with a single step. We have taken the first step, and I’d like to join hands with you, for us to grow together, he added.