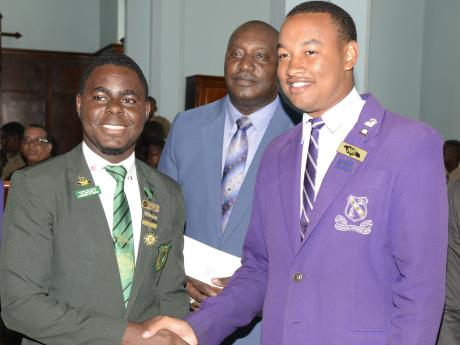 A handful of students, as well as administrators from Calabar High School, visited Kingston College (KC) this morning where a public apology was made for derogatory slurs directed at their rivals.

During an assembly on Monday at Calabar, students engaged in a derogatory chant against KC.

The incident was captured on video, which has gone viral and which has drawn strong public condemnation.

Today, Calabar representatives including acting principal, Calvin Rowe, head boy, Andre McKenzie, and principal, Albert Corcho, who is currently on leave, visited the North Street-based institution where the apology was made to the “champions”.

“On behalf of the Calabar High School community I would like to express congratulation on your victory in the recently concluded championships,” McKenzie said.

“I would also like to take this opportunity to offer sincerest apologies for the defamatory video that has been circulating where students of my school were doing a shameful chant about your school. Please note that we do not condone this kind of behaviour,” he added.

The apology was accepted by KC’s principal Dave Myrie.